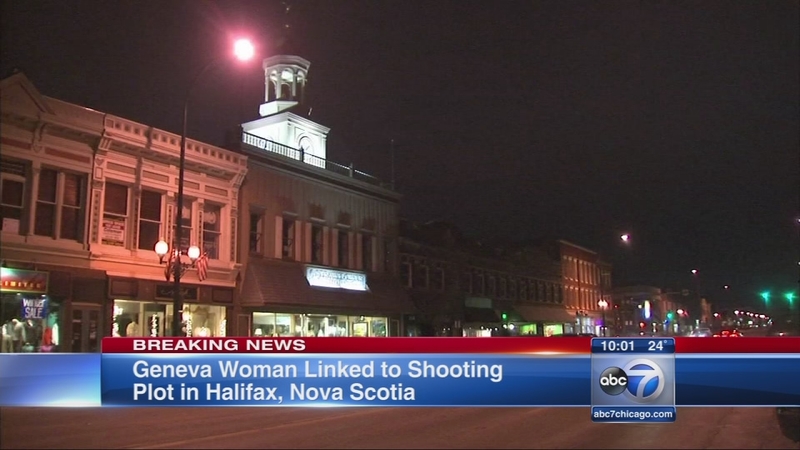 GENEVA, Ill. -- A 23-year-old Geneva woman has been linked to a mass shooting plot set to play out in Canada on Valentine's Day.

A senior police official said Friday police foiled a plot by two suspects who were planning on going to a mall and killing as many people as they could before killing themselves on Valentine's Day in Halifax.

The official told The Associated Press the suspects were on a chat stream and were apparently obsessed with killing and death and had many photos of mass killings. Police and other officials said it was not related to Islamic terrorism.

The official said one of the two suspects, a 23-year-old American woman from Geneva, Illinois, was arrested at Halifax's airport and confessed to the plot. The official said she prewrote a number of pronouncements to be tweeted after her death.

"I would classify it as a group of individuals that had some beliefs and were willing to carry out violent attacks against citizens," said Brian Brennan, Royal Canadian Mounties.

Police said the suspects had access to firearms, but did not elaborate.

The official spoke anonymously because they were not authorized to speak publicly.

Police earlier said two other Nova Scotia men, ages 20 and 17, were also involved, although investigators are still trying to determine what their role was. The police official said the 17-year-old male was wanted for threatening to shoot up a high school and had an outstanding warrant.

"Had they been able to carry out their intentions the possibility for a large loss of life was definitely there," Nova Scotia Royal Canadian Mounted Police Commanding Officer Brian Brennan said earlier Friday.

"We believe we have apprehended all known individuals in this matter and have eliminated the threat. We are not seeking any further suspects at this time in relation to this investigation."

Canadian Public Safety Minister Steven Blaney applauded the work of police in Canada and Geneva, Illinois and well as border officials in a statement. The Geneva police department said in a statement they were contacted by Canadian police and had no contact with the American woman before her arrest.