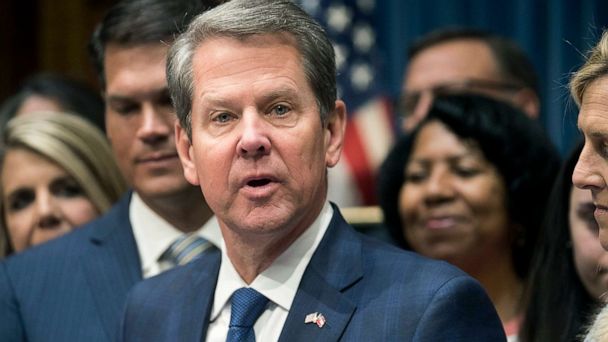 ABCNews
By BRENDAN RAND
Georgia Governor Brian Kemp has vetoed a bill that would have required recess in elementary schools across the state.

The bill, Georgia House Bill 83 would have "provide[d] for recess for students in kindergarten and grades one through five" starting in the 2019-2020 school year.

The bill also encouraged schools to "include an average of 30 minutes per day of supervised unstructured activity time, preferably outdoors" and said local boards of education should implement policies to "ensure that recess is a safe experience for students, that recess is scheduled so that it provides a break during academic learning, and that recess is not withheld for disciplinary or academic reasons."

Governor Kemp, in explaining the veto, said that local school boards of education currently set recess policies for students in kindergarten through eighth grade in Georgia "based on a thorough understanding of day-to-day educational operations as well as regular interaction with administrators, educators, families, and students."

Kemp said the new bill would take control away from those school boards.

"While I support expanded recess opportunities for Georgia's students, I am a firm believer in local control, especially in education," Kemp said in his explanation. "This legislation would impose unreasonable burdens on educational leaders without meaningful justification."

The bill passed by a vote of 160-11 in the House and 48-4 in the Senate before reaching the governor.

As the lead sponsor of the bill, Georgia Rep. Demetrius Douglas, a former Georgia Bulldog linebacker and a current high school football coach in Henry County, argued that the bill was a necessary antidote to the fact that one-third of Georgia children ages 10 to 17 were overweight or obese in 2017, according to the Georgia Sun newspaper.

"It's a health initiative first," he told the Sun.

A 2007 study by the Center on Education Policy pointed to the implementation of the No Child Left Behind Act in the 2001-2002 school year as a point when school districts began to cut time for recess.

The study found that school districts had increased time in areas like English, arts and math in elementary schools and subsequently decreased time for other subjects and activities, including recess and physical education, with 20% of the districts involved in the study reporting a decline in time for recess.

The Centers for Disease Control and Prevention (CDC) SHAPE America recommended in "Strategies for Recess in Schools" that elementary schools provide a minimum of 20 minutes for recess, and not to replace recess with physical education or vice versa.

The CDC says recess allows students to increase physical activity and also helps them in the classroom and with social and emotional development.

A 2013 report by the American Academy of Pediatrics also said that getting rid of recess "may be counterproductive to academic achievement, as a growing body of evidence suggests that recess promotes not only physical health and social development but also cognitive performance."

The legislation was one of 14 bills that Kemp announced that he vetoed on May 10.
Report a correction or typo
Related topics:
abc newsnational
Copyright © 2020 ABC News Internet Ventures.
More Videos
From CNN Newsource affiliates
TOP STORIES