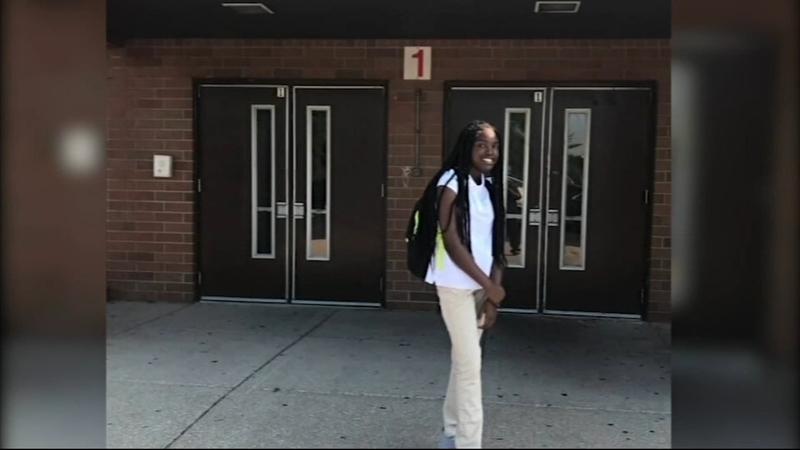 HARVEY, Ill. (WLS) -- A 12-year-old girl is fighting for her life after she was shot in the head inside a home in south suburban Harvey.

The shooting occurred at about 9 p.m. Monday near 158th Street and Paulina Avenue, Harvey police said.

Kentavia Blackful's family was gathered inside their home, watching the Bears game and putting finishing touches on her 12th birthday party on the eve of her birthday, when the shooting happened.

The girl's grandfather, Dennis Hunt, said he was standing outside on the porch when two people came up to him and opened fire. Hunt said he crawled inside his house.

One of the bullets went through the main window, hitting Kentavia in the back of the head as she sat at the family computer.

"I was sitting in the living room by the window and we just heard gunshots and my son said, 'Get down' and he went to knock all of us down, but it was too late, she was already hit," said Bretta Blackful, the girl's grandmother. "Her sister was sitting there, her 5-year-old little sister. I sheltered her when I was on top of her so she wouldn't get hit."

Kentavia was rushed to Christ Hospital in critical condition.

"We were laughing and joking about it and just having fun sitting there watching the game when shots flared," Bretta Blackful said.

Kentavia had planned to spend her birthday playing basketball and having a skating party. Instead she spent it in the hospital in critical condition. Neighbors gathered Tuesday with balloons for a vigil and to offer prayers for her recovery.

The shooting left the whole family shaken. Her grandmother, whom she's very close to, can't believe they are not even safe inside their own home.

"It's a shame that we're sitting here in the house and we can't even sit in the house. A child cannot play," she said. "Today is my baby's birthday, and for them to take her birthday from her, and she has a basketball game today she was looking forward to this."