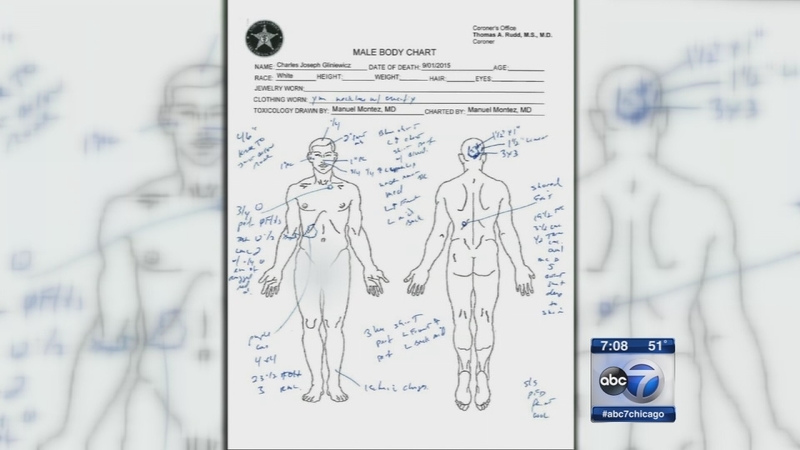 FOX LAKE, Ill. (WLS) -- The ABC7 I-Team has an exclusive first look at the autopsy report in the death of Fox Lake police Lt. Joseph Gliniewicz.

Shortly after Lt. Gliniewicz died, the I-Team filed a Freedom of Information Act request for his autopsy report. The I-Team received it Wednesday afternoon, nearly three months after the incident that prompted the biggest manhunt in Lake County history - one we now know was unnecessary because Gliniewicz killed himself in an elaborate suicide scheme aimed at covering up his own criminal misconduct.

"When he gets shot in the right vest, he falls, probably backwards," said Lake County Coroner Dr. Thomas Rudd.

Lake County's coroner and investigators have described several times how Lt. Gliniewicz died in a field on September 1, but this is the first time we are seeing the actual record of what his autopsy reveals.

According to the report obtained by the I-Team, blood work showed lots of caffeine in his system but no street drugs - even though authorities found cocaine in his desk at the Fox Lake Police Department - and no steroids, even though he was a physical fitness buff.

The coroner's autopsy report states that it was a "single penetrating gunshot wound of the chest" that killed him.

In his lower abdomen, doctors found a bullet perforation through his cell phone and a 4" by 4" purple contusion beneath it - bruising from the initial shot that didn't penetrate his body.

They found the fatal gunshot entrance wound in his left upper chest where the bullet was recovered inside the exit wound.

The I-Team has learned that after officers heard the second gunshot, it took them four to six minutes to actually find Lt. Gliniewicz laying in the field, stomach down.

Investigators say police turned him over and checked for signs of life but that he was already dead, and no lifesaving measures were performed by officers nor by paramedics.

"There were two shots. Somebody that is going to kill themselves is not going to shoot themselves twice," Melodie Gliniewicz said.

In a Crime Watch Daily interview, Gliniewicz's wife said she thought it was a murder. The autopsy and police concluded it was suicide.

Authorities have frozen the bank accounts of Gliniewicz's widow. On Friday, her attorneys will go in front of a judge to argue that her accounts should be unfrozen, even though they're still part of an ongoing investigation.