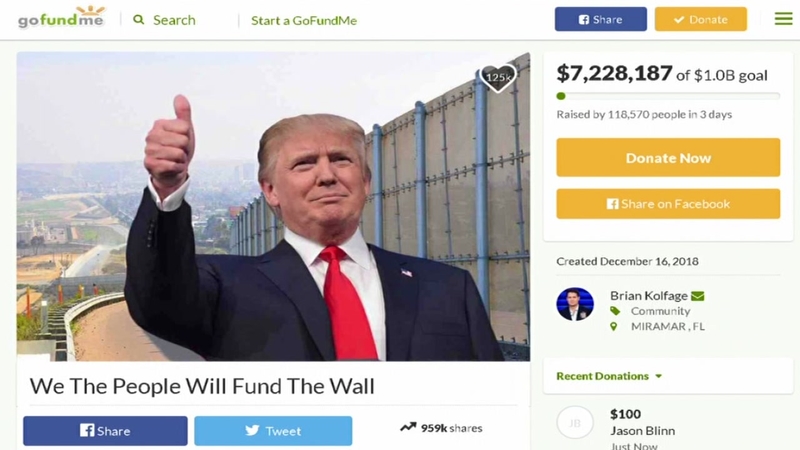 MIRAMAR, Florida -- A Florida veteran has started a GoFundMe page to help pay for a wall at the United States border with Mexico.

The 37-year-old is a triple amputee and Purple Heart recipient who says he feels deeply invested in this nation.

"If 63 million people who voted for Trump each pledge $80, we can build the wall," Kolfage said.

Kolfage said he has contacted the Trump administration and a legal firm to ensure that the government can only use the money raised for a wall.

Kolfage also writes that he is a supporter of legal immigration.

"I have grandparents who immigrated to America legally, they did it the correct way and it's time we uphold our laws," Kolfage wrote.

The campaign entitled "We The People Will Fund The Wall" launched Sunday, and has raised over $6 million in small donations as of Wednesday night.

"As a veteran who has given so much, 3 limbs, I feel deeply invested to this nation to ensure future generations have everything we have today," Kolfage writes. "Too many Americans have been murdered by illegal aliens and too many illegals are taking advantage of the United States taxpayers with no means of ever contributing to our society."