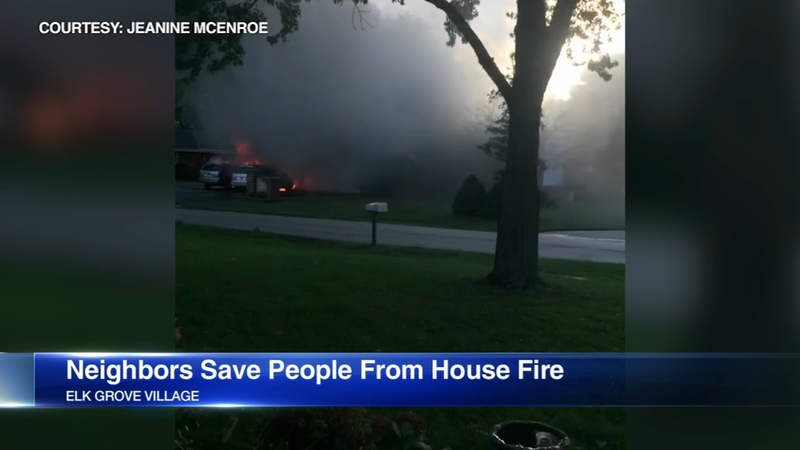 ELK GROVE VILLAGE TOWNSHIP, Ill. (WLS) -- Four people escaped a burning house thanks to the heroic efforts of their neighbors.

Fire officials said the blaze began in the garage area of the home in the 500-block of Crest Avenue in Elk Grove Village Township.

"I thought it was like a nightmare at first. I was like this can't be happening," said Emily Bunescu, who was saved from the fire.

Bunescu, a grad student who has been living at her grandfather's house along with her uncle, was sound asleep in her upstairs bedroom over the garage and had no idea there was a fire.

Jeanine McEnroe, who lives across the street, said her husband and another neighbor, Brett Tanner, ran into the home to help the people inside. Tanner said he was just being a good neighbor.

"I was looking for a hose because it was just in the garage, but in that 30 seconds I was running around, the fire got bigger," Tanner said.

Although both good Samaritans helped to get everyone out -- including Bunescu's 82-year-old grandfather and his caregiver -- the married father and construction worker doesn't consider himself a hero.

"I was just doing what I hope anyone would do for me or you," Tanner said.

The cause of the fire remains under investigation as the search continues for the family's pet cat, Tiger. Bunescu is grateful for the community of neighbors responsible for saving her family's lives.

"If they didn't come in, I don't know if any of us would be here today because it happened within the blink of an eye. The whole house was engulfed," she said.