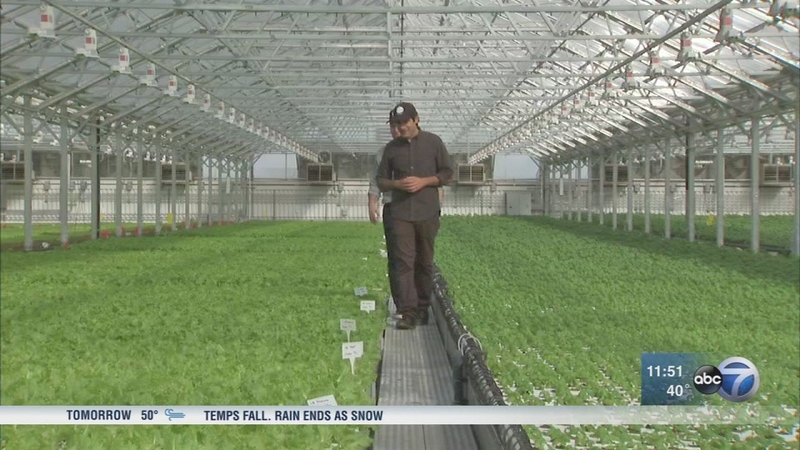 CHICAGO (WLS) -- In the past, eating fresh salads greens or just-picked herbs only happened in the summertime in Chicago. Restaurants and grocery stores were always forced to import them during the winter. Not anymore.

One of the nation's largest greenhouses just happens to be in Pullman, on the city's South Side, and that's where our Hungry Hound found himself recently, seeing how local workers are supplying quite a few restaurants with farm-fresh produce year-round.

Part of the problem with the conventional agricultural system is its intense use of resources, like land and water. In the wintertime, as you alluded to, produce has to be trucked or flown in, meaning a lot of carbon dioxide is burned up. But what if you could grow produce in a tighter environment, using sustainable energy?

That's what the folks at Gotham Greens figured out in New York City several years ago, and they've now got a massive greenhouse on the south side, doing the same thing for local grocery stores and restaurants.

The two acres of rooftop that Gotham Greens uses, on top of the Method Manufacturing building in Pullman, would be the equivalent of 50 acres of farmland. But after having built three greenhouses in New York City, they had the expertise to build this efficient ecosystem here two years ago.

"After developing and operating the sophisticated, climate-controlled greenhouses in New York City we decided to expand and Chicago was our next favorite city," said Viraj Puri, the CEO of Gotham Greens. "There's just so much farm-to-table activity and a sophisticated food movement and chefs and consumers increasingly wanting high-quality culinary ingredients."

There is no wasted space. Butter lettuce, romaine, red oak and herbs, like basil, take up most of the 75-thousand square feet. Technology plays a role too.

"This greenhouse technology enables us to grow fresh produce using a small fraction of the land or the water or the carbon emissions compared to conventional farming, while being able to grow it in really local proximity to the marketplace," said Puri. "We use 100% renewable electricity to power these greenhouses. We recycle 100% of our irrigation water and all the produce is non-GMO and pesticide-free."

Wind turbines and solar panels make a difference, as does the greenhouse's proximity to the city. Their packaged greens are already available in local grocery stores and restaurants.

"The greens, when you get 'em in house, they always have a nice crunch and snap to them; I think it's very important. Also, you know they're cutting it the day before, or even that morning," said Russell Kook, the Executive Chef at Gibson's and Hugo's Frog Bar.

Those two are just a few of the many restaurants buying from Gotham Greens. They rely on the butter lettuce for all of their burgers, as well as the base for their most popular appetizer - crabmeat and avocado. But they also use the freshly-picked basil for a caprese salad, a dish that would normally be relegated to summer, but since the herbs are grown and picked locally, why not?

"It actually has a little bit of a smell to it which means it's that fresh and vibrant," said Kook.

In Steve's extra course, he takes a look at one of Gibson's famous, gigantic desserts: the Turtle Pie. You'll need a few friends to help out.

In Steve's extra, he takes a look at one of Gibson's famous, gigantic desserts: the Turtle Pie. You'll need a few friends to help out.