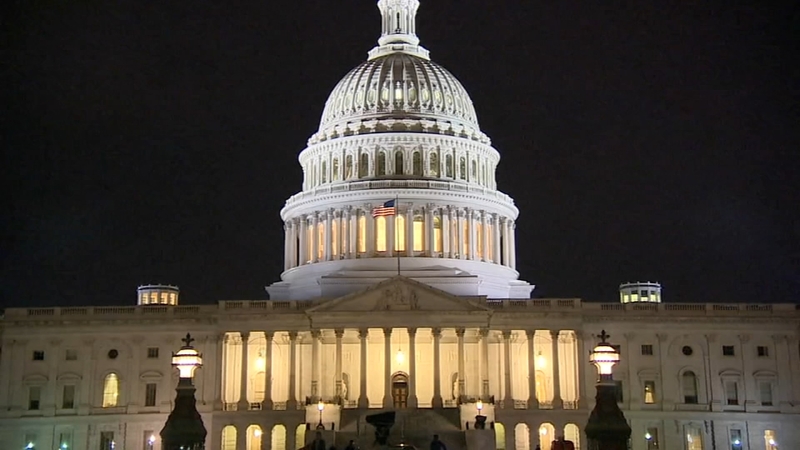 CHICAGO (WLS) -- President Trump signed a bill Friday to end the longest government shutdown in American history without money for a wall along the southern border. That's a relief to thousands of federal workers in the Chicago area who haven't been paid in the past month.

Trump began his remarks by praising the federal workers who missed their second paycheck Friday. Many are now calling for a funding solution beyond February.

"Not only did you not complain but in many cases you encouraged me keep going because you care so much about our country," Trump said.

President Trump's announcement he'll reopen the government was a relief to thousands of federal workers in the Chicago area who haven't been paid in a month.

"The president said that federal workers had not complained, and clearly he wasn't listening or paying attention because our union and federal employees have been rallying, have been speaking out," said Matt Muchowski, American Federation of Government Employees.

"We are a little concerned that it's such a short term budget," Muchowski said. "Federal workers don't want this kind of uncertainty."

Eager to return to the Environmental Protection Agency job she has held for 26 years, Cynthia Colquitt is relieved the shutdown is over but is nervous about what happens in three weeks.

"Who wants to go back to where we started at the end of December?" she wondered.

For her, the politics behind the shutdown or what ended it is not important; getting back to work is.

"I don't trust anything anymore, I'm just going to go with the flow and prepare myself better the next time," she said.

Putting away groceries she paid for by a gift card given to federal workers, the single mom said if there is any silver lining it was the generosity of all the people who helped her and all federal employees. She said her mortgage company and creditors were understanding as well.

"People were opening their hearts more and more, I wasn't expecting it," said Colquitt.

Day 35 of the shutdown marked a tipping point for the nation's aviation system. There were delays up and down the east coast, and a ground stop at LaGuardia Airport in New York City, after nearly half of air traffic controllers called in sick at the DC-area control center.

The ripple effect was felt at O'Hare, where planes had to sit on the runway. By midway delays had eased.
"We've never seen anything quite like this in aviation history where bureaucratic ineptitude is solely the cause of the problem," said Prof. Joseph Schwieterman, DePaul University.

"Interfering with air travel is in itself a crisis and I think the president wanted to avoid the bad publicity about that," said U.S. Rep Jan Schakowsky (D-IL 9 ).

Before the president's announcement, Mayor Rahm Emanuel blasted Trump at a ribbon cutting for a new O'Hare American Airlines hangar.

"The president's obsession with this wall is now having, making him walled off from the effects on people here in the United States of America," he said.

And President Trump did leave the option of another government shutdown open if he doesn't get his wall. But for the moment, federal workers are feeling some relief.