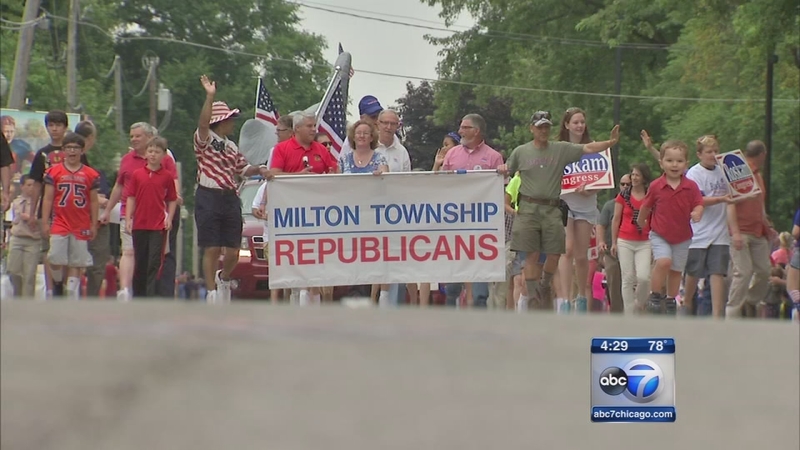 CHICAGO (WLS) -- Politicking at parades is as American as apple pie. From Illinois' Governor Bruce Rauner to senate contenders, politicians marched in parades across the area.

But this year, in this state, some politicians are receiving a slightly different reception.

If Illinois lawmakers anticipating a happy homecoming after finally coming up with a partial budget, they were mistaken.

In Republican-rich Wheaton, one guy yelled at Governor Bruce Rauner to balance the state's budget.

"I blame everyone, but he is the leader and when the ship is sinking you look to the captain," said Ruttenberg when asked who he blamed for the Illinois budget crisis.

ABC7 Eyewitness News spoke with a Wheaton resident Kahty Corniels who was trying to deliver a message to the governor via a sign saying, "No budget; no votes."

"I think he saw it. I don't think he wants to make eye contact with me," said Corniels. "I'm just tired of it. These are adults. We elected them and they can't even make a decision on how to run the state."

The governor wasn't much into straying from the script today.

"Do you hear from people as you march about what's going on in Springfield about the budget?" ABC7 Eyewitness News reporter Ben Bradley asked the governor.

"No, today we celebrate the independence of America," said Rauner.

Nationally, Hillary Clinton had several supporters marching in Wheaton's parade, but next to no one showed up on Donald Trump's behalf, despite the fact the county is overwhelmingly Republican. Then again, the state's GOP senator has said he won't vote for Trump.

"You were the first to come out and say Trump is unfit. Does that mean you're voting for Hillary Clinton?" Bradley asked Illinois Republican Sen. Mark Kirk.

"No, David Petraeus is who I'd like to write-in. I think he's better qualified. We need someone who will be the best commander-in-chief we've ever had," said Sen. Kirk.

"I've been working hard for the people of Illinois and he has not. You're talking about a guy who goes with the corporate interests against the interests of everyday people," said Democratic Rep. Tammy Duckworth, who is running against Kirk for the U.S. Senate.