GPS Misdirection: Could your GPS be leading you into danger? 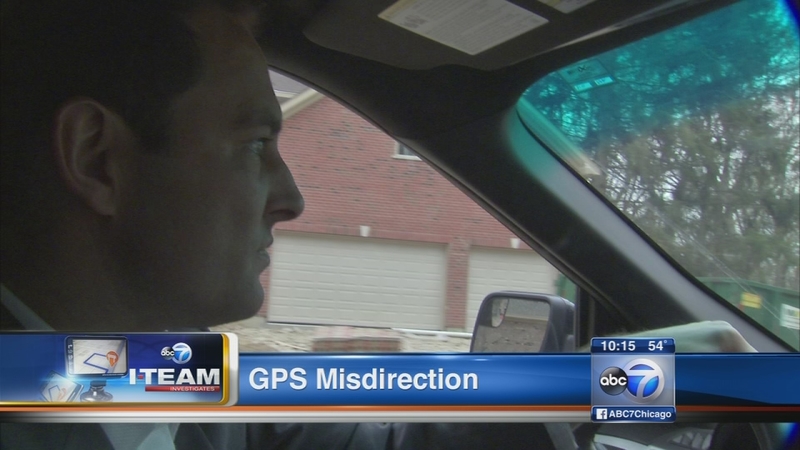 The ABC7 I-Team is uncovering flaws with mapping and navigation systems. In one recent case, GPS is blamed for contributing to a deadly crash in our area.

Most drivers use GPS on a phone, a separate device, or built into the car. Now, the I-Team reveals why you may not want to be too dependent on that computerized voice that's giving you GPS misdirection.

It could be a new road, like this one in north suburban Lincolnshire, that's not showing up on GPS, or a voice directing you to drive through a field to get to Marshall High School on the city's West Side. The I-Team had no trouble finding several examples of confusing and even dangerous GPS instructions.

"I have also experienced it just giving me the wrong direction. It's calculating a route and just changing it while I am on the route," said Hintsa Hagos, a driver.

But in East Chicago, Ind., there was a deadly outcome. Driver Iftikhar Hussain, 65, told the I-Team that GPS led him to the closed, demolished Cline Avenue bridge. Hussain says he was looking at the navigation screen as he drove off the bridge, plunging 37 feet. His wife died in the fiery crash.

The driver also says barricades were missing. An Indiana Department of Transportation spokesperson confirmed that at least one barricade - bolted into the ground - and a warning sign had been moved. The Lake County Indiana police are investigating.

And near Milwaukee, a truck stuck got on a foot bridge and the driver told police GPS sent him on the small path.

"Sometimes it can be very unpredictable where it takes you," said Sergei Kozyrenko, Parknav.

Kozyrenko works out of Chicago's 1871 tech hub in the Merchandise Mart. He's a developer of Parknav, a parking app which uses mapping systems.

"With any GPS system there is always some error," Kozyrenko said. "The cheaper phones, the cheaper GPS systems, there is more error."

He says some smaller roads may not get registered until a driver on an GPS system uses the road.

If you have a dedicated GPS device or mapping system built into your phone or car, you should make sure to update it. The same goes for apps on your phone.

"It has taken me in the wrong direction, probably because I had not updated my system," said Pam Thomas.

If you're taking a road trip you should first familiarize yourself with the route at home. Remember you may not always have 3G or 4G service, so have a backup plan. You can also download maps which can still use GPS capabilities built into your phone, without data.

Garmin told the I-Team that GPS devices provide route suggestions, and drivers need to exercise common sense - that came in response to one driver lashing out on YouTube.

"Why it want me to go 15 more miles when the truck stop is right here. What kind of GPS is that?" the driver said on YouTube.

In some of our GPS examples, we used Apple Maps on the iPhone. Apple says drivers should report any errors by hitting the "i" information icon onscreen. Apple has more information online about location precision or accuracy and general Maps help.

Industry spokespeople have also repeatedly reminded drivers, these are navigational aids and they shouldn't be followed blindly.