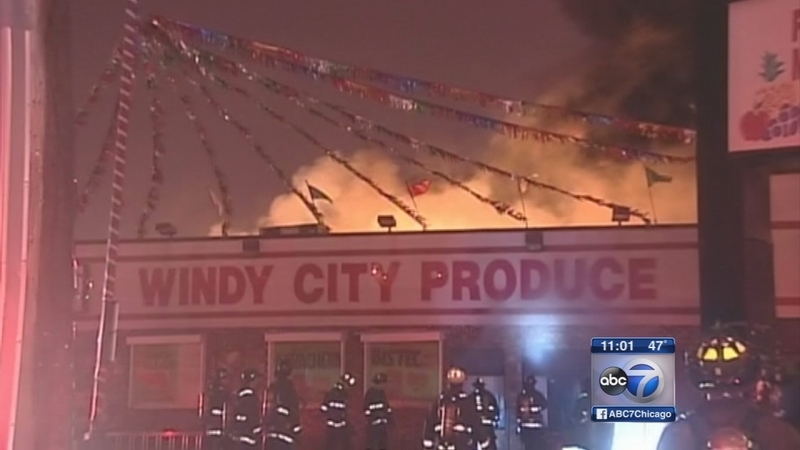 CHICAGO (WLS) -- Investigators are looking into whether someone set fire to a grocery store in Chicago's South Old Irving Park neighborhood. Windy City Produce has been in business for more than 30 years.

ATF agents joined Bomb and Arson investigators Monday morning as they sifted through the rubble, searching for evidence of what started the extra-alarm fire.

Chris Verveniotis, the property owner, told ABC7 Eyewitness News there appeared to have been a break-in.

"It's nothing definitive. They saw blow torches. The safe was blow torched," Verveniotis said.

Flames broke out at the market near West Roscoe Street and North Pulaski Road around 3:30 a.m. Monday. Around 100 firefighters were called to battle the two-alarm blaze. The billowing smoke drew dozens of people to the scene.

"I was driving home and I smelled smoke all over the area. When I got inside my house, my whole house was smelling, like, burnt. So I woke my mom up to make sure they were okay and checked on my son. That's when I started hearing all the fire trucks come around," said Jeannie Rodriguez, who lives nearby. 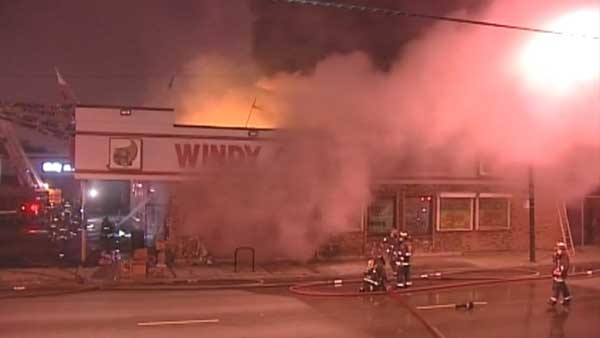 PHOTOS: Windy City Produce gutted by fire
Investigators are looking into whether someone set fire to a grocery store in Chicago's South Old Irving Park neighborhood.

Verveniotis woke up to a call from a board-up company early Monday morning, offering their services. He had no idea his store was on fire. He and his two business partners arrived at the scene around 4 a.m. and found the building gutted by flames.

"Disaster. Nothing left," said Joe Lucchetto, one of the store owners.

Windy City Produce served the community for about 35 years. The grocery's owners and longtime customers are heartbroken that it's gone.

"My grandmother comes here. Everyone comes here. It's the closest one here. They're the nicest people I ever met, all the owners and the employees. Every time you walk in they always greet you. They're always friendly. They ask you if you need this, you need that. They help you right away at the fruit market or by the meat department," Rodriguez said.

The owners said they will need time to assess what is needed restore Windy City Produce. But they also said they are committed to rebuilding the neighborhood market.

"It's our life. We'll get back going," Lucchetto said.