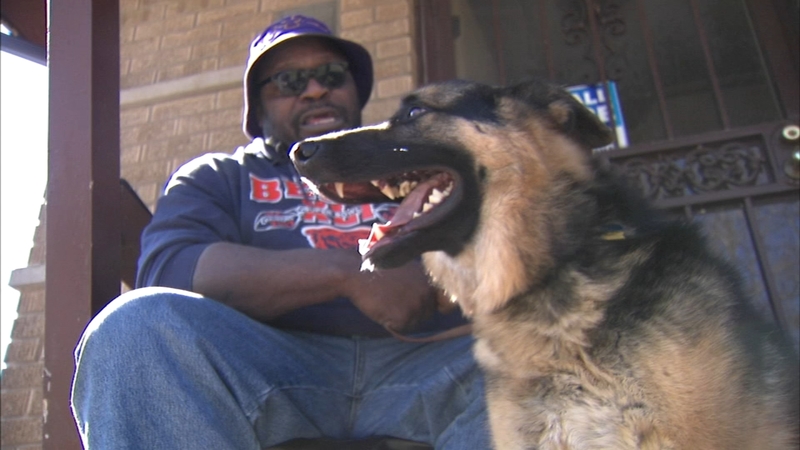 HARVEY, Ill. (WLS) -- Thanks to an outpouring of support, Lucca, a stolen guide dog, was returned to his rightful owner Saturday morning.

Kevin Coachman, who is blind, said one of the teens who took Lucca had a change of heart. The specially trained German shepherd went missing from his backyard in south suburban Harvey on Tuesday.

Lucca, a specially-trained German Shepherd, was returned to Kevin Coachman of Harvey.

"I'm so glad to have my guide dog back, my friend and my eyes," Coachman said.

Coachman, who became blind a few years ago after he was shot multiple times during a carjacking, said he'd been praying for Lucca to come home.

He's had the dog for three months after they were paired together by the Seeing Eye Foundation, an organization on the East Coast that helps the visually impaired.

On Saturday morning, the 58-year-old's prayers were answered when he got a phone call from a neighborhood teen who said his friends had taken Lucca. He said he knew it was wrong.

On Friday, the married father told ABC7 how thieves had taken his dog from the backyard of his home earlier this week.

The duo had spent the day running errands and then walked home from the train station.

"I got him home and I took him straight to the backyard while I went in to feed him and get him water, and when I came back out my dog was gone," said Coachman.

Since word of Lucca's return, there's been a steady stream of well-wishers and support on Coachman's doorstep.

"When I heard him say to please return his dog, or at least to be good to the dog, because he's a good dog, it made me cry," said Gineen O'Neil.

"I'm so proud he got his dog back because I like the dog too," said Joy Bays, Coachman's neighbor and longtime friend.

While the ordeal may have left some bitter, Coachman said it only renewed his faith in the goodness of people.