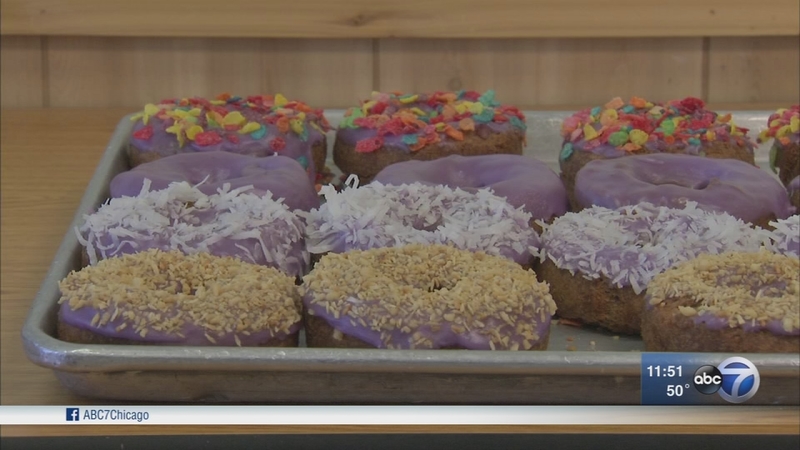 GURNEE, Ill. (WLS) -- There's a tiny donut shop in north suburban Gurnee cranking out freshly-made donuts, including a special one with Filipino roots that's only available on the weekends.

It's called "ube" and this popular purple yam is all over Filipino menus, but not so much in donut shops. In fact, the Cambodian family who owns this particular shop near the Wisconsin border never even intended to work with ube..

But a donut contest entry, spurred on by some friends, led to a big win, and as a result, big interest in this purple-hued fried ring.

The family-run Gurnee Donuts, in the shadow of Six Flags, has been around for more than 20 years. They make more than a dozen different types of cake and yeast-raised doughnuts, plus some fantastically decadent apple fritters, but a fire two years ago kept them closed for months.

"After reopening that first year we competed in DonutFest and we won DonutFest," said co-owner Kevin Lee.

They won with something called an ube donut.

"My family is Cambodian, my wife is Filipino, a majority of my friends are Filipino; they wanted me to try something different, so they were like, why don't you try making an ube donut," he said.

Ube, or purple yams, are abundant in Filipino kitchens, often paired with coconut. But on their own - raw - they don't taste like much. Lee experimented though, with a half-dozen different recipes, finally settling on a mixture that adds sugar, butter, ube-vanilla extract and condensed milk to the yams. Several scoopfuls of flour are added, and the mixture is beaten and combined until Lee's mom approves of the consistency. Then he begins the laborious process of hand-cranking the dough directly into the fryer with the aid of a special donutmaker. After 90 seconds, he flips them over with long wooden sticks. After they're removed, they get doused in a waterfall of sugar glaze; some are dipped in purple frosting; others get a dunk in grated coconut.

The ube flavored donuts are only available on the weekends. They're open from 6 a.m. until 2 p.m. or until they run out. And the ones that are purple frosted or covered in coconut get all the Instagram love, but honestly, I say go with the simple glazed.

Extra Course: Steve goes into much greater detail about how Gurnee Donuts makes their fantastic apple fritters, showing you each step along the way.