WLS
By Will Jones and Michelle Gallardo 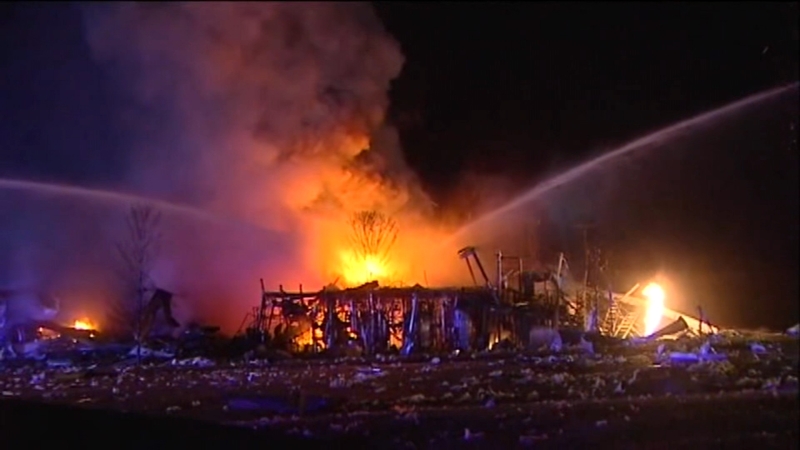 WAUKEGAN, Ill. (WLS) -- Crews located another body on Sunday at the site of a large explosion at a Waukegan industrial plant, officials said, bringing the death toll from that incident to three with one person still unaccounted for.

Of the nine in the building at the time of the blast, one body was found early Saturday. Four people were taken to the hospital and one of those, 29-year-old Allen Stevens, died later Saturday at Loyola Medical Center. The condition of the other three workers taken to hospitals was not immediately known, Lenzi said. The third confirmed death was the body located Sunday with one other body still to recover. Two other workers did not require treatment at the time.

The bodies were taken to the Lake County Coroner's Office after being extracted from the rubble. The process has been arduous due to heavy debris and safety concerns; it took crews more than two hours to extract the body found Sunday, according to a press release from the Waukegan Fire Department.

"It's slow going. We can't go in there and do what we want to do quickly because the building is not structurally sound," Cooper said.

Autopsies for the two bodies recovered are scheduled for Monday, according to Dr. Howard Cooper, the Lake County coroner. The coroner's office will not make any attempt to identify the bodies recovered until after the autopsies are performed, Cooper said. His office plans to use dental records to make those identifications.

The search continues for the third missing person, officials said.

The investigation into the cause of the explosion is also ongoing. The incident is currently being classified as accidental, Lenzi said.

"We are not looking at any foul play. But I cannot further elaborate upon the actual cause of the explosion until I'm fully confirmed as to what occurred," he said.

A representative for the company confirmed that the three men who did not escape were actively mixing products at the time - a process that they'd performed hundreds of times.

There may have been some indication that something was wrong, however, as workers who escaped the building told first responders that it was those three men who told others to get out.

"Most of the processes they do are very non-hazardous. Silicone itself, non-hazardous substance," Lenzi said. "Something this weekend went horrifically wrong. That's what our investigation will come up with."

Many who heard and felt the blast Friday didn't know what to think at first.

The blast could be heard in southern Wisconsin, and some debris was found miles away from the plant.

"I live about 20 miles north in Kenosha and I was sitting watching TV downstairs and I heard the windows shake in the house and asked my wife, 'Did you feel that, too?'" said David Rettig, who owns the building next to the plant.

On Sunday, members of Waukegan's Church of Joy gathered across the street from the plant to pray for the victims' families.

"Anybody who has lost a loved one, that is something you are going to carry with you for the rest of your lives," said Carol Bowen, one of the church members. "We just hope and pray to God he gives them strength."