As Haiti protests continue, US citizens warned to shelter in place 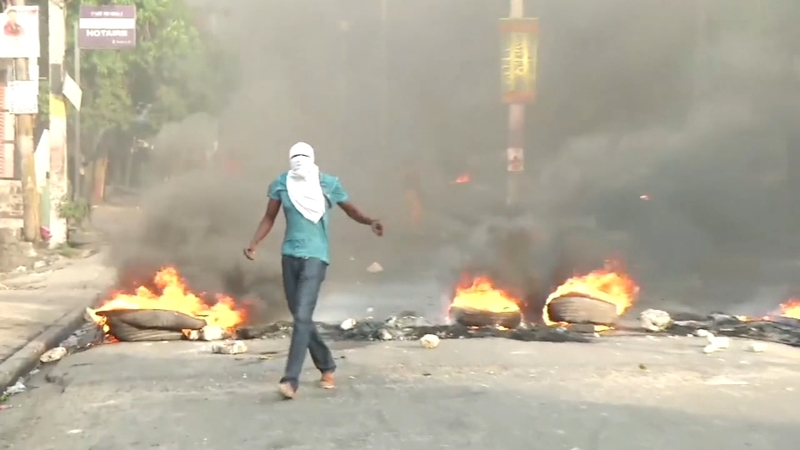 PORT-AU-PRINCE, Haiti -- The US Embassy in Haiti warned its citizens Saturday to stay inside amid continued demonstrations in the capital of Port-au-Prince and a northern city following a fuel price hike.

Protesters have been demonstrating this week against a sharp rise in fuel prices ordered by the government.

Prime Minister Jack Guy Lafontant on Saturday announced a temporary stop to the price increases and appealed for calm. Prices for gasoline were to rise 38% while diesel prices were to go up 47% and kerosene 51%, the Haitian daily newspaper Le Nouvelliste reported.

US citizens in #Haiti: Due to demonstrations, roadblocks, and violence across Port-au-Prince, @USEmbassyHaiti personnel have been instructed to rebook any flights originally scheduled for today, July 7. Several airlines have cancelled flights into Port-au-Prince this morning. pic.twitter.com/UXxZPyZbOp

An estimated 120 American and 100 Haitian guests are staying in a Port-au-Prince hotel where demonstrators earlier tried to set fire to the hotel and get past security, said Stacy Librandi Bourne, an emergency medical professional from HERO Client Rescue who is at the Oasis Hotel.

After the Prime Minister's announcement, the situation calmed down, she said.

US officials told tourists and missionaries to shelter in place.

"Do not attempt to travel at this time. Avoid protests and any large gathering of people. Do not attempt to drive through roadblocks," a State Department Bureau of Consular Affairs official said.

There are no reports of US citizens in Haiti being injured, the embassy said.

A youth group from Bradenton, Florida, that was scheduled to return from a missionary trip in Haiti is stranded until at least Monday, Executive Pastor Dewayne McFarlin said.

The group from Bradenton's Woodland Community Church left Neply, Haiti, early Saturday for a 3 p.m. flight from Port-au-Prince International Airport, McFarlin said. Only a few miles into the approximately 30-mile journey, the group, which includes middle school- and high school-age children, encountered armed individuals demanding payment for access to the roadway, according to McFarlin.

They talked their way past the roadblock, but elected to turn around when they came to second group of armed individuals who had erected a blockade of burning tires on the road, McFarlin says.

A local colleague of McFarlin's was riding on a motorcycle a few miles ahead of the missionary group's bus. The friend called him to say that the road ahead was filled with similar impromptu "checkpoints," McFarlin said.

The group returned to Neply but McFarlin said he thinks they won't get out until Monday at the earliest.