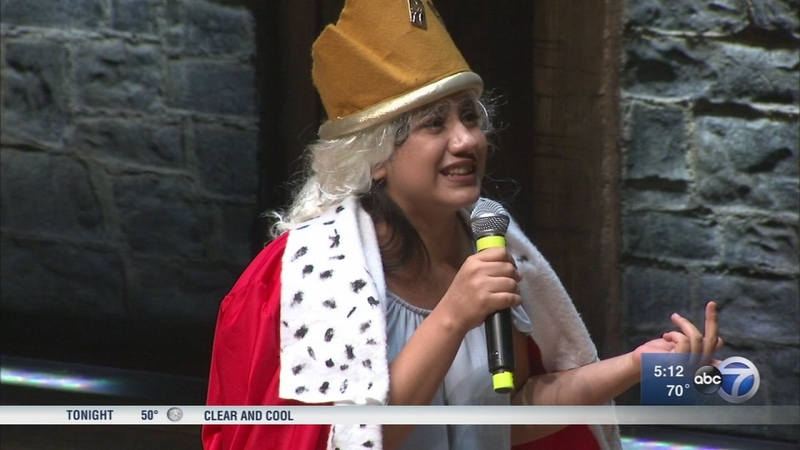 CHICAGO (WLS) -- Some high school students turned a history lesson into a rap performance and got to perform their material for the cast of the Broadway hit "Hamilton."

"I'm just a fan of knowing what happened before me so it was just a great experience to learn history," said Neiman Williams, a high school performer.

CICS Ralph Ellison students Neiman Williams, Rashaad Whaley, and Josh Campbell are among those at the Chicago-area high school performing their history projects based on their study of Alexander Hamilton and the historical events surrounding his legacy.

It's all a part of the "Hamilton" educational program, which began with the Broadway production last year. The day's Mistress of Ceremonies was Ari Afsar, who plays Eliza Skylar and Eliza Hamilton.

"Really just telling the truth of what actually happened - the facts, the history and facts - you find the connection to it and find the relatability," she said.

Students from the 27 participating school packed the CIBC theatre for the special field trip. The young performers spent several weeks studying one of the country's founding fathers only to create an original work which was debuted on the musical's stage.

"It really puts their learning to life. It takes it off the page and allows them to truly experience things," Bloom Trail High School English teacher Deanna Mattran said.

Bloom Trail High School junior Michael Fraction performed as the voice of a weapon to highlight the pain of gun violence, while Thorton Fractional South High School students Skylar Gertonson and Luis Herrera used the spoken word set to music in their performance about the relationship between George Washington and Alexander Hamilton at Valley Forge.

"Being in the shoes of George Washington, metaphorically, it gave me the perspective of his emotions," Gertonson said.