CDC urges parents to get children vaccinated against measles 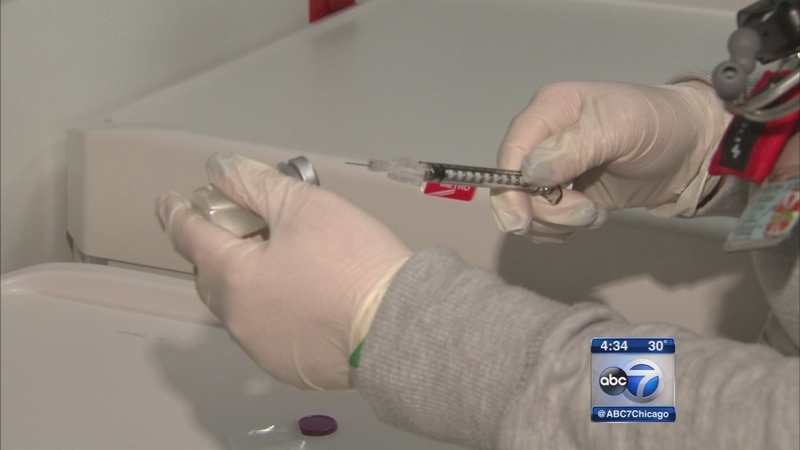 CHICAGO (WLS) -- Medical professionals are blaming recent outbreaks of measles on people who are not getting the vaccine, which they say is the most effective way of preventing the disease.

Nurse Imee Atraje was hesitant to get her 4-year-old son the MMR vaccine against measles, mumps and rubella. But, eventually Ivan got the shot.

"It is hard to say. Things change all the time. Five years from now, whatever they were saying was true could be, you know, unfounded," Atraje said.

That skepticism has no place in modern medicine, according to infectious disease specialists who are now on the lookout for measles in Chicago. All children should receive two doses of MMR before entering kindergarten, unless there are medical contraindications, according to the Centers for Disease Control and Prevention.

"Declining vaccination rates, in addition to a more globally mobile population results in increased exposure and increased risk among children and adults in the United States," Dr. Larry Kociolek said.

In 2000, domestic measles was eradicated from the U.S. However, by 2014, 23 outbreaks of measles were reported across the nation. The CDC warns that parents delaying vaccinations or refusing vaccinations out of fears are leaving their families susceptible to a disease that is "one of the most contagious viruses in existence."

"The biggest concern of measles vaccine was the false association with autism that was reported several years ago. That is completely false," Dr. Kociolek said.

A recent outbreak at Disneyland is now blamed for 58 measles cases in seven states, according to the CDC. Carriers can pass on the disease for four days before they even show signs they have it, according to doctors.

Should adults be re-vaccinated?

According to the CDC, adults born before 1957 are generally considered immune to measles and mumps.

However, those who were born in 1957 or later should make sure they have documentation of one or more doses of the MMR vaccine. Doctors can also check a patient's blood for evidence of immunity.

A second dose of MMR is recommended for college students, people who travel internationally and healthcare workers.