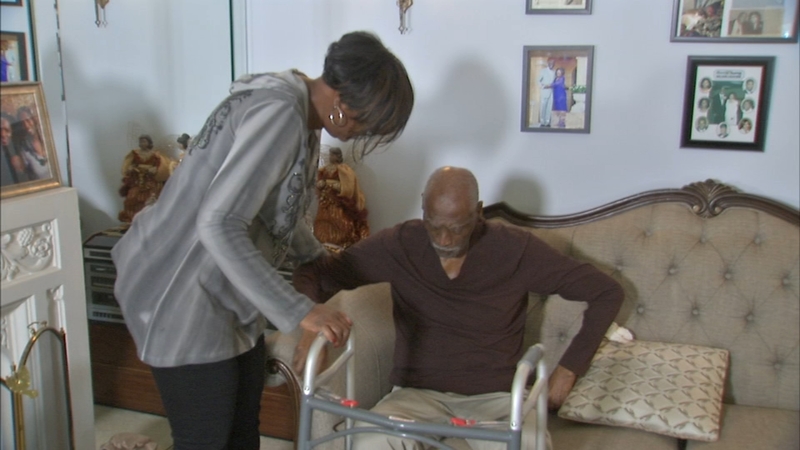 CHICAGO (WLS) -- The daughter of a Chicago World War II veteran is furious with the office of Veteran Affairs.

She says she's been fighting the VA for months to get her father's health benefits, but she claims the VA is creating a major roadblock.

For many seniors like William Dise, leaving the house just isn't an option. He's 94-years-old and has major health problems.

But his family says the VA won't release his health benefits unless he comes down to their office in person.

Having a parent with health challenges isn't easy, but Alice Dise has vowed to stay right by her dad's side.

"My father was probably the best father anyone could have," she said. "My father worked two and three jobs his entire life to provide for his four children."

William Dise also fought for our country in World War II, serving in the Philippines and New Guinea.

Now his health is in decline. He was diagnosed with dementia and most recently orthostatic hypertension.

"So when he stands, his blood pressure plummets. It can go anywhere from 150/80 to 86/60 in a matter of seconds," Alice Dise said. "So there's a fear of him falling or blacking out."

She says it's happened before. He just got back from rehab after taking a fall.

His daughter says she tried to access his VA health benefits for home care, but the Jesse Brown VA Medical Center told her he'd have to apply in person.

"We've explained how dangerous that can be for his health," Alice Dise said. "Even just getting him out of this house would be very challenging, up and down the stairs."

She says she offered to have his medical records transferred or she could deliver them in person, but was told that wouldn't work either and the only way they would come to him is if he was dying.

"I just think it's outrageous," Alice Dise said. "For a 94-year-old veteran, who served his country, who is obviously in a weakened state...he is owed this. He deserves this."

A spokesperson with the Jesse Brown VA Medical Center responded saying, " Any time a veteran or family member has a concern, we reach out to them directly, just as we have been doing with the veteran in this case."

One day after ABC7 reached out, the family said the VA called them and agreed to send someone to the veteran's home for an examination immediately.

His daughter, Alice, is thankful and William Dise is pretty happy, too.

"That's a blessing from the Lord," he said.

ABC7 asked the VA what their policy is when it comes to in-home assessments for people who are disabled. They said, "Veterans or family members with concerns to reach out to our Patient Advocates at 312-569-7959 or our Customer Service Manager at 312-569-8188."