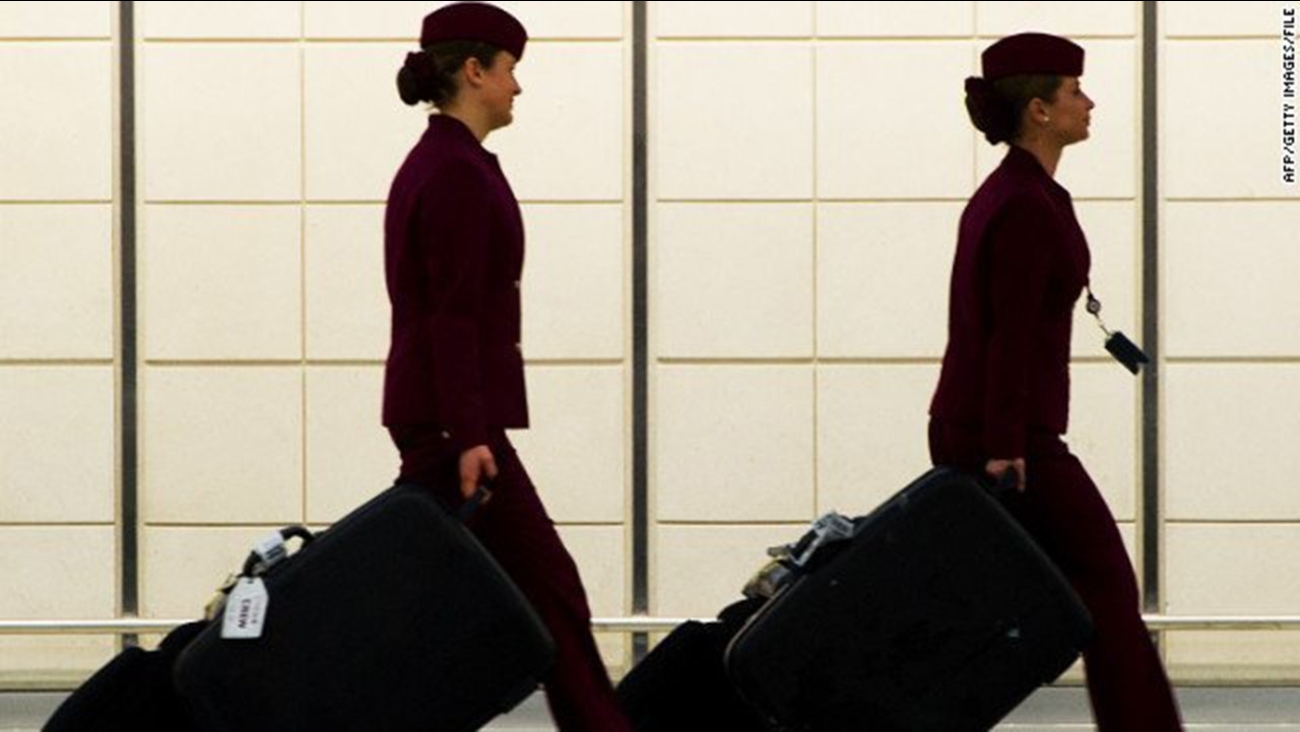 A flight attendant's life may look glamorous, but the job comes with health hazards that go beyond managing surly passengers. (Getty Images/CNN)

A flight attendant's life may look glamorous, but the job comes with health hazards that go beyond managing surly passengers. As a group, they get certain cancers more than the general population, according to a new study.

Scientists have long found that flight attendants get more breast cancer and melanoma. The new study, published Monday in the journal Environmental Health, saw the same trend and detected a higher prevalence of every other cancer the researchers examined: Non-melanoma skin cancer, uterine, gastrointestinal, cervical and thyroid cancers were all seen at a higher rate in flight attendants.

"Something that somewhat surprised us, to some extent, was that we also saw a higher instance of breast cancer in women with three or more children," said study co-author Irina Mordukhovich, a research associate at the Harvard T.H. Chan School of Public Health.

Typically, the more children a woman has, the lower her risk of breast cancer. A previous study showed a result similar to the new breast cancer finding, she said, but Mordukhovich didn't expect those findings would be replicated.

"Women with three or more children are already probably not getting enough sleep," Mordukhovich said. "Combine that with this disruption from the job, especially for those who fly internationally, this may be an indication that the circadian rhythm disruption is having an impact."

Disruptions in circadian rhythm -- a person's daily sleep-wake cycle -- are linked to an increased cancer risk, studies have shown.

The new study compared data on self-reported cancer cases in the Harvard Flight Attendant Health Study, which collects data to help people understand how their job can affect health, with cases tracked in the US Centers for Disease Control and Prevention's National Health and Nutrition Examination Survey, an ongoing study that tracks the health and nutrition of adults and children in the general population. Eighty percent of the flight attendants in the study were women, as would be expected, the authors said, in a "feminized" occupation.

The research does not answer why flight attendants report higher cancer numbers, but the authors have some ideas, based on earlier research.

Flight attendants are often exposed to possible or probable carcinogens like pesticides, fire retardants, jet fuel and other chemicals more frequently than the general population. They are also exposed to higher levels of cosmic ionizing radiation; the World Health Organization says this is a cancer risk.

If you fly a lot, should you worry about your own cancer risk? Mordukhovich said there isn't a lot of research on frequent fliers, although logic suggests that they face similar exposures. Independently, NASA scientists have studied high-altitude radiation to help improve monitoring for aviation industry crew and passengers.

Steve Fiering, a professor of microbiology and immunology at the Geisel School of Medicine at Dartmouth, said it's hard to argue with the idea behind the recent study.

Mordukhovich said she and her colleagues were motivated to study flight attendants because there are gaps in the research on them, and that could mean gaps in the policies meant to protect them on the job, at least in the United States.

In Europe, flight attendants' exposure to cosmic ionizing radiation is monitored and limited more by law. There are no official dose limits for American aircrew. In fact, it wasn't until 2014 that US flight attendants got protections from the Occupational Safety and Health Administration like other American workers, but even today, those protections are limited, Mordukhovich said.

"Our goal with this is to do the science and provide more evidence for policy-makers about this profession's health," Mordukhovich said. "We hope this helps."