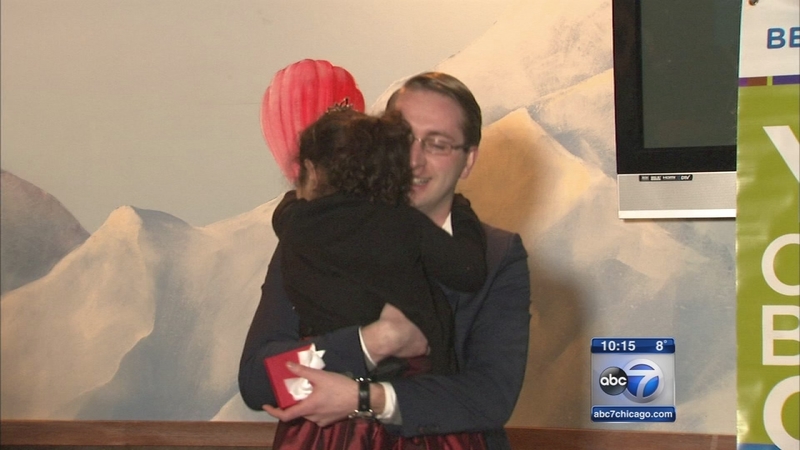 SCHAUMBURG, Ill. (WLS) -- A suburban Mount Prospect girl who needed a life-saving transplant finally got to meet the man who stepped up to help. The strangers became friends after the operation through e-mail and Skype, but had never met in person until now, when he made the trip from his home in Austria.

Family and friends applauded as Sabrina Chahir thanked the man who saved her life. Sabrina was diagnosed with leukemia in 2009. Doctors told her parents a bone marrow transplant was her only hope, but it would be difficult to find a match because she is half Hispanic and half Arabic.

In 2011, her parents got the news that a donor had been found in Europe through an international registry.

"It was like a second chance. So, there's no word for me to explain how thankful I am, how happy I am," said Natalia Wehr, Sabrina's mother.

Maximilian Eule, who lives in Austria, signed up to be a bone marrow donor in hopes of helping a man in his home country, Germany. He wasn't a match for him, but then he got the call that he could help Sabrina.

"When they told me it's a little kid, I was close to crying because it was like, a really strange moment. She has so many years to live now more," Eule said.

"I think I felt much better after that. He helped me very much," Sabrina said.

"The hopes are she will have continued normal growth and development, that she can have a normal life. The patient as well as parents can have all their dreams their fulfilled," said Dr. Reggie Duerst.

Eule just had to travel to Dresden to donate his stem cells. He paid for his own trip here to the states to see Sabrina.