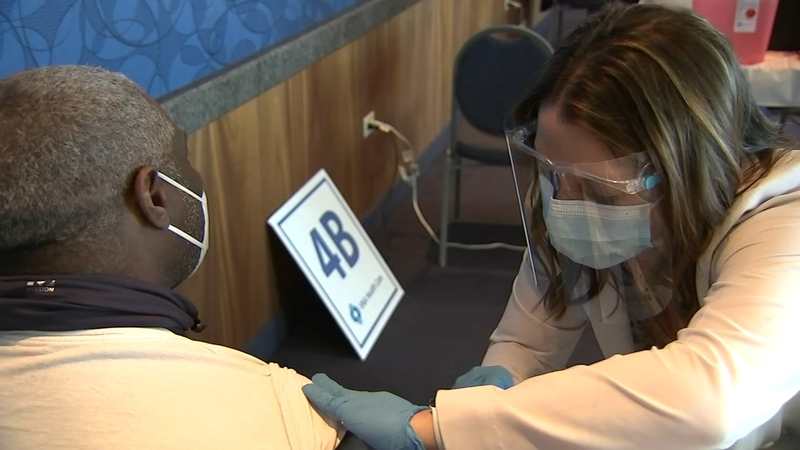 AURORA, Ill. (WLS) -- Governor JB Pritzker joined Aurora Mayor Richard Irvin and Black leaders for a mass vaccination clinic to put a focus on getting the vaccine to the Black community.

The Cathedral of Grace St. John AME Church, a historic Black church founded in 1862, served as the vaccine site. More than 750 people signed up to receive their first dose Tuesday.

The vaccination site was open for this clinic aimed at the Black community on Tuesday only, but similar clinics are planned for March 19 aimed at the LatinX community and on March 25 for people with disabilities. Locations and the registration process for those clinics are still being finalized.

Aurora's mayor worked with the Black Vax Aurora group to launch the effort, with the goal of ensuring Black residents have access to the vaccine, particularly in the city's two largest counties of Kane and DuPage.

According to the Illinois Department of Public Health, only 2.8% of Kane County's approximate 88,000 vaccines have been distributed to the Black community. The number is even lower in DuPage County, with just 2.3% of its roughly 190,000 distributed vaccines.

"One thing will make our community comfortable, is seeing others that look like us, speak with facts about the vaccine and take it ourselves," said Mayor Irvin.

At Aurora's Main Baptist, church employees directly called their older members and helped them get registered for the one-day clinic.


"Of the, I think, 240 deaths that happened in Aurora, my mom was number seven," said Pastor Julian Spencer. "So what's important to me is to tell all of my people, you gotta take this vaccine."

The vaccines were available for qualified Black residents in CDC Groups 1A, 1B and 1B+. That includes people 65 and older, healthcare workers, first responders, teachers and those with a variety of medical conditions, including diabetes, obesity and cancer. The clinic reached capacity in less than 24 hours.

In nearly every case, those here got the information directly from someone they knew.

"They sent it out to an organization I'm part of, Girl Trek. Someone put it in our group chat and I was able to sign up really quick," said Bennita Drain.

"I want to try to get back to doing some of the things that I didn't do last year. So yeah, there was no hesitation," said Tony Robinson.


Governor Pritzker said more vaccine doses are on the way.

"Even if everyone who wants the vaccine were to receive it, that wouldn't be enough for us to reach herd immunity, so it's important that we get the message out to those who are vaccine hesitant that vaccines are safe and they offer effective protection against serious COVID illness and death."

Dr. Anthony Fauci, on the urgency of vaccinating communities of color, said, "Since minority populations, particularly brown and Black people, clearly have a greater risk of getting infected and a greater risk of serious disease, we have got to get the vaccines to them in an equitable manner."

When will kids be able to get COVID vaccine?