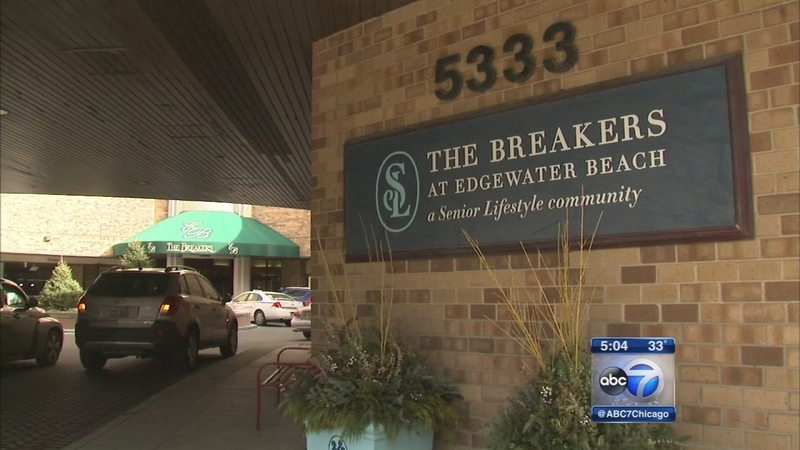 CHICAGO (WLS) -- A norovirus outbreak at a retirement community in the Edgewater Beach neighborhood on Chicago's North Side has left several people hospitalized.

The facility is taking some severe steps to keep that number from going up. One of the healthier residents - who wished to remain anonymous - spoke about the conditions inside The Breakers.

"It has been a very stressful situation for the residents not knowing how many people are going to come down with this," the resident said.

Breakers management and the Chicago Department of Public Health confirm norovirus has spread rapidly since last Friday, January 22. Since then, over 500 residents have been confined to their apartments, with group activities and dining hall meals suspended. Food has been delivered twice a day to people in-house. The measures have not stopped the need to transport dozens of residents to area hospitals.

Caregiver Michelle Chaney says inside, the focus is on cleanliness.

"Every day I walk in, I see people wiping the counters down, telling me to use hand sanitizer on my hands and if I get on the elevator they are like, 'Don't touch the buttons, there's germs,'" Chaney said.

Norovirus is a name for a family of gastrointestinal ailments that can strike in clusters and hit seniors especially hard - particularly when they're living in close proximity, such as on cruise ships or at group homes.

"I didn't want to go back up there," said Belinda Wilson, a CVS delivery agent who refused to go inside. "Everybody is talking about everybody being sick and throwing up and people are walking around with masks."

"It has been nerve-wracking. After the first few days it was like, 'When is this going to end? When are we going to see light at the end of the tunnel?'" a resident said.

Breakers executive director Leslie Eldridge has been sending daily bulletins to staff and residents imploring people to "refrain from wandering around the building."

On Friday afternoon, The Breakers said they have been following their established infection control procedures and are monitoring the situation until it is "fully resolved."

The city's health department says the Breakers food preparation procedures are good, and the emergency may in fact be subsiding.

For more information on preventing the spread of norovirus, click here.