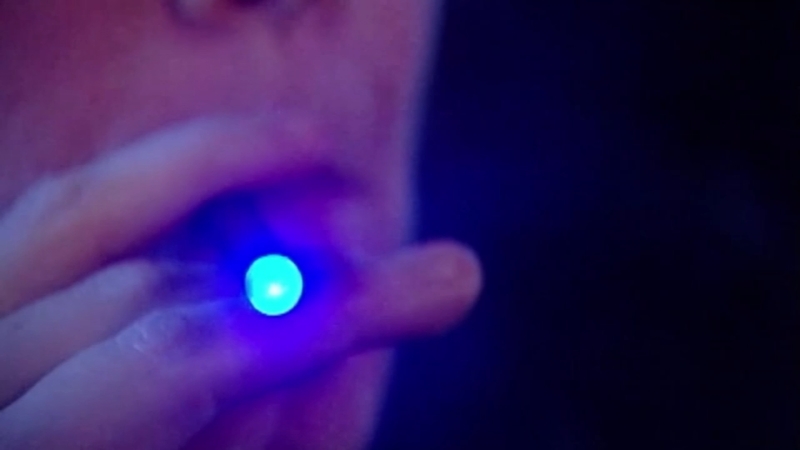 CHICAGO (WLS) -- Government health agencies are warning smokers after a spate of illnesses and even a death in Illinois that have been linked to vaping.

As of Tuesday, 215 possible cases of this mysterious illness were reported in 25 different states, up 11 percent from a Centers for Disease Control report one week earlier.

This all also comes days after an Illinois resident who recently vaped died after being hospitalized with a severe respiratory illness, according to the Illinois Department of Public Health. The person's identity was not immediately released and details surrounding the death remain unclear.
"We know this individual had significant, severe respiratory illness, and died while hospitalized," said IDPH Chief Medical Officer Dr. Jennifer Layden.

Scientists and investigators are currently focusing on the chemicals and compounds found in some of the additives used in e-cigarettes, particularly THC oils. While officials wait on those test results, IDPH public health director Ngozi Ezike urges parents to speak with their kids about the potential risks of e-cigarettes in order to prevent more respiratory illnesses.

"We are worried that all these unregulated products and people adding additives and flavors are releasing all kinds of dangerous compounds, chemicals that could be hurting ourselves," she said.

In Illinois there have been 27 severe illnesses linked to vaping, 26 of which required hospitalization. Cases have been reported in Cook, DuPage, Kane, Lake, Madison, McHenry, Peoria, St. Clair, and Will counties -- including Chicago and Champaign.

Symptoms of respiratory illness include cough, shortness of breath and fatigue. Some patients also said they experienced vomiting and diarrhea.

The CDC said they have found that several patients have acknowledged to health care personnel that they used THC-containing products, according to the IDPH.

The American Vaping Association released a statement:
"Each day of this crisis brings more evidence that street vapes containing THC or other illegal drugs are responsible for these illnesses, not nicotine vaping products...We continue to call on the CDC and FDA to not only promptly investigate these incidents, but also act to ensure that adult smokers know that nicotine vaping products remain a far safer alternative to smoking."

No specific product has been identified in all cases, nor has any product been conclusively linked to illnesses. Even though cases appear similar, it is not clear if these cases have a common cause or if they are different diseases with similar symptoms.

Health officials urge anyone experiencing chest pain or difficulty breathing after using e-cigarettes or vaping in the weeks or months prior to seek medical attention.

"We urge people to use caution and consider avoiding the use of such material," Layden said.

IDPH said they are also investigating a dozen other cases of severe lung illness that could be tied to vaping.