WLS
By Stacey Baca and Will Jones 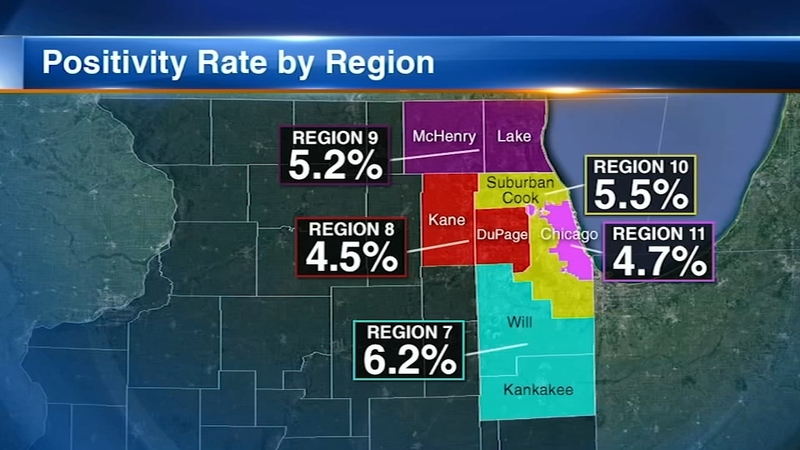 Illinois reported 1,393 new COVID-19 cases and 18 additional deaths Wednesday. The preliminary seven-day positivity rate for July-21 to July 27 stands at 3.8%, but some regions have positivity rates much closer to the 8% that will trigger increased restrictions.

"We've made progress in Illinois, but we've also seen it can be fleeting. And right now, things are not heading in the right direction," Pritzker said.

The governor was joined by IDPH director Dr. Ngozi Ezike at a press conference, where warned local officials in problem areas within each health region to take action quickly to avoid triggering a rollback of reopening allowances.

"Not only have we started to see an increase in cases over the past several weeks, but we are also seeing a slight increase in hospital admissions as well," Dr. Ezike warned. "These are clear indicators that we are headed in the wrong direction."

The positivity rate for every region in the Chicago area has risen since last week.

Region 9, which is Lake and McHenry counties, has a seven-day rolling average of 5.2%, and has increased for eight days straight.

Region 8, which is Kane and DuPage counties, has seen its seven day positivity rate increase to 4.5%. '

Region 10, suburban Cook County, has a seven-date positivity rate of 5.5% that has also climbed for eight days straight.

Region 11, the city of Chicago, has seen its positivity rate increase to 4.7%.

Finally, Region 7, which is Will and Kankakee counties, has a positivity rate of 6.2% which has climbed for seven days straight.

Will and Kankakee County comprise Region 7 of Illinoi's 11 health regions. Their positivity rate is 6.2%, and has been climbing for seven days straight.

Certain health metrics trigger a rollback of reopening guidelines, such as allowing bars to open and indoor dining, and one of them is hitting an 8% positivity rate for three days straight.

"That 8% is something that's getting out of control, so we will have to set in mitigations when that 8% is tripped," Prtizker said.

Other metrics include rising hospitalizations and changes in hospital bed capacity. Those metrics could also trigger a regression in reopening, even if the region has not yet hit and sustained an 8% positivity rate.

To avoid a resurgence, the state has a three-tier plan regions can follow, but it's up to local leaders to decide on specifics like targeting the size of social events or limiting capacity at bars and restaurants.

"We're asking all communities to take a look at what they are seeing," Dr. Ezike said. "Please identify what mitigation efforts you can implement to slow the spread. Maybe that does mean your favorite restaurant goes back to takeout only."

"Residents should hold your elected leaders accountable, demand they take action," Pritzker said. "If they don't, they could send the entire region back to closed bars and closed restaurants, stricter limits on gatherings, or even another stay-at-home order."

In Will County, there is a lot of concern about the spread of COVID-19 and they're hoping they won't have to go back a phase in the state's reopening plan, which some said could be devastating.

"We have taken it very seriously and, having done all that, I am concerned about the numbers going up," said New Lenox Mayor Tim Baldermann.

Businesses still struggling to get back on their feet could see some restrictions reimposed by the governor.

"You get a little worried," said Henry Adams, who owns a barbershop in Joliet. "Whatever happens, happens. You just have to stick it out."

"He has a lot of money," said Donald Newell, business owner, of the governor. "We are just everyday middle class workers that's trying to make it. But when businesses go down that they can't open, they can't operate. What are you going to do then?"

Some bar owners also fear being shut down again.