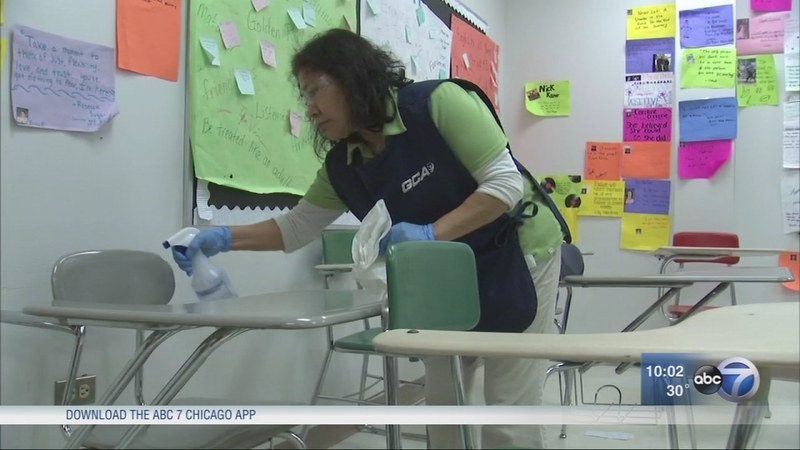 ST. CHARLES, Ill. (WLS) -- Classes at St. Charles East High School will be canceled Tuesday after 800 students and 50 staffers missed class on Monday, many of them reporting that they were ill with symptoms of the stomach flu, a school official said.

Due to the large number of student absences at St. Charles East H.S., classes at East are cancelled for Tuesday, January 10.

Cleaning crews worked Monday to bleach and disinfect the school, hoping to curb the spread of any illness. They worked under the guidance of the Centers for Disease Control & Prevention and the Kane County Health Department.

The cause of the mass illness was undetermined late Monday. When asked about the possibility of food poisoning, Blaney said many of the students brought lunch from home last week. He also said they cannot say whether norovirus is to blame.

"We are not diagnosing students and we are not doctors and we are not epidemiologist. We cannot say definitively say it's norovirus but the symptoms of what many of the students are experiencing is consistent with stomach virus," said Jim Blaney, a spokesman for St. Charles Community Unit School District 303.

Administrators were working to contact students' parents to determine which students missed class due to illness. The school has 2,500 total students and about 100 staffers.

The parking lot was mostly empty on Monday, but symptoms of a widespread illness started Saturday night. The school postponed a boys' basketball game because 10 of the team's 14 players were ill, Blaney said.

Over the weekend, school officials ordered a thorough cleaning of the school, but did not use a bleach solution. On Monday, school was released at 2 p.m. for another cleaning.

Dr. Ken Pearlman, an attending physician at Northwestern Memorial Hospital, said norovirus is contracted from person-to-person contact or from touching a contaminated surface.

Other schools in the district will remain open on Tuesday, but administrators urge parents to keep their child at home if they are sick to avoid spreading an illness.

Even at other district, schools parents were cautious.

"I decided to keep my kids home because last time my daughter was sick she ended up in the hospital," said Lara Kristofer, a parent of a Lincoln Elementary student.

In a Facebook message on Sunday, the district said: "As some of you are all too well aware, a stomach virus is making the rounds in our community and is affecting several students who attend our schools. We have been in close contact with the Kane County Health Department over the weekend for guidance and information and, our grounds and custodial staff have been making sure our schools have been thoroughly cleaned in preparation for the return of the students tomorrow, Monday, January 9. As always, in consideration of others, we ask that students who are ill stay home. Please understand this virus is present in the entire community, it is not just affecting students in our schools. We also remind everyone to make sure they practice good hygiene habits such as frequently washing your hands, covering your mouth when coughing, stay hydrated, and get the proper amount of rest."
Related topics:
health & fitnessst. charlesflu
Copyright © 2021 WLS-TV. All Rights Reserved.
More Videos
From CNN Newsource affiliates
TOP STORIES