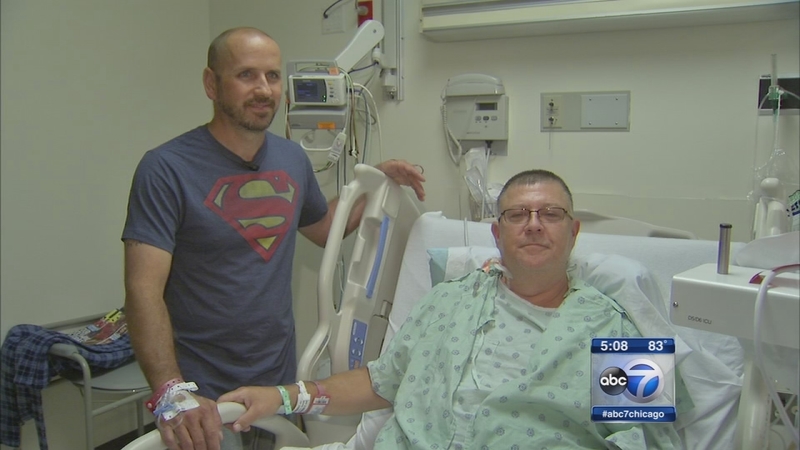 ARLINGTON HEIGHTS, Ill. (WLS) -- Stewart Botsford of Arlington Heights is recovering from a life-saving kidney transplant all thanks to the kindness of a stranger who saw a post on social media and decided to help.

Botsford and Justin Maduena, a downstate Illinois native, met face-to-face for the first time only a few weeks ago when Maduena volunteered to donate his kidney.

"I was excited and scared and I felt like I won the lottery," Botsford said of that first meeting.

"I had a little bit of super to give this man. This actually worked out good," he said.

The dual operations were performed at the University of Chicago Medical Center on Tuesday, and were the result of a chain of chance events that led to Maduena finding out about Botsford's quest to find a kidney from a live donor.

"There should be more people out there in the world like him and it would be a lot happier place," Botsford said.

Botsford's kidneys were failing after years of struggling with diabetes and hypertension. The 54-year-old Illinois Tollway Worker, who is married and has an adult daughter, was told he could die waiting for a kidney from a deceased donor. Botsford was undergoing grueling dialysis treatments three times a week when his wife Laura had the idea to put window signs in the family's cars appealing for help.

Nothing happened for months, until someone saw one of their signs, took a picture of it and put it on their Facebook page. The post was eventually shared with Maduena's wife, who texted it to the 42-year-old utility worker, who surprised himself and immediately called Botsford to say he would help.

"I have six kids and if none of my family or friends could match me, I would hope that somebody would step forward and do what I'm doing," he said.

Both fathers are doing fine after the surgeries and said they hope their story will bring more attention to the plight of hundreds of thousands of people in need of lifesaving organ transplants.

"You go through some pain and stuff like that. You get through that and then you change somebody's life forever," Maduena said.

There's a lot of good people out there in the world, and he's one of them," Botsford said.

Botsford expects to be released from the hospital Friday. His health insurance will pay for his transplant and medications, as well as Maduena's medical costs.