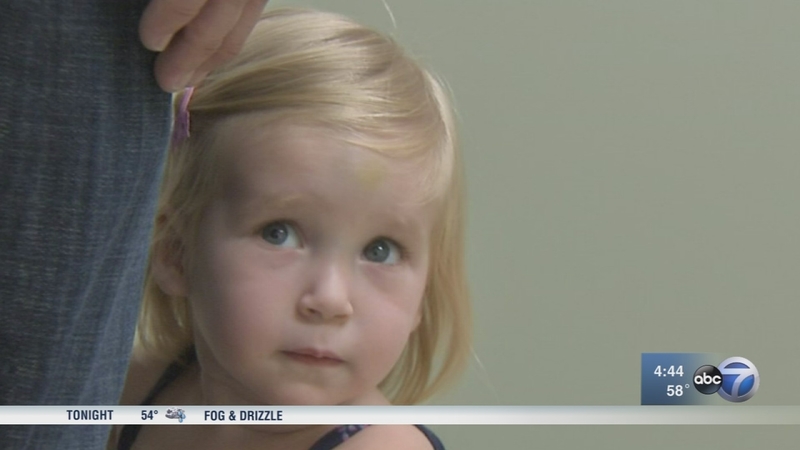 CHICAGO (WLS) -- A trial treatment at a Chicago hospital is attracting children and their families from around the world. One recipient, whose progress ABC7 Eyewitness News has been following, has shown improvement with her diagnosis, a disease known as childhood Alzheimer's.

Marian McGlocklin, 2, was diagnosed with Neimann Pick Type CP, or NPC, which some refer to as pediatric Alzheimer's. The disease is degenerative and fatal.

ABC7 first met Marian at Rush University Medical Center where she was the youngest NPC patient to undergo a new treatment. She wasn't walking or talking much at that time.

Six months later, Dr. Elizabeth Berry-Kravis said she is much more alert and has made progress on all of her test scores.

"She's starting to put two words together, to be who she was always meant to be. It's so wonderful," said her mother Sara McGlocklin.

After the initial treatments at Rush, which involve injecting medicine into Marian's spinal fluid, she has been able to get the bi-weekly treatments near her home in Los Angeles.

Patients have been coming from all over the country, hoping to stop NPC in its tracks. But NPC does not have a cure.

"The treatment is wonderful and is extending her life, but it's not a cure. NPC is still a fatal disease," McGlocklin said.

The McGlocklins will return to Los Angeles after this great progress report and more resolve to support other families of NPC patients, raise awareness and fun research to allow kids with NPC to become healthy adults.

The McGlocklins are working with the Foundation started by Notre Dame's late coach Parseghian, who lost three of his four grandchildren to NPC. The latest campaign to fund research is called the "No Pucker Challenge."