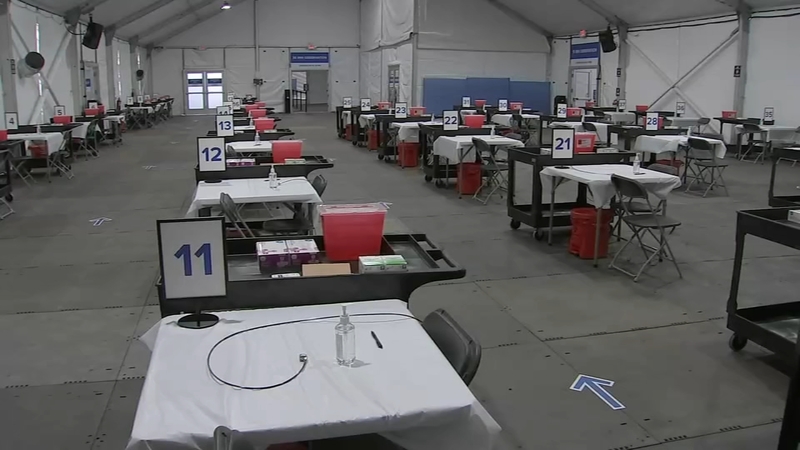 CHICAGO (WLS) -- All appointments at the United Center mass COVID vaccination site are, for now, limited to Chicago and suburban Cook County only, officials announced Sunday.

As of Monday, only Chicago residents could make appointments because only the city's website was offering them. Officials blamed FEMA for the last-minute changes, which have left the city, county and state scrambling and many people very confused about what they're supposed to do.

Crews were very busy at the United Center Monday getting the site ready for Tuesday's opening as a vaccine distribution center. Barricades went up with new signage to direct people where to go.

But there was confusion after last minute eligibility changes were made for who can get their Pfizer shots there, with the website taking appointments suddenly limiting access to Chicago residents only. Cancellation messages were sent out to people who had confirmed appointments just moments before.

"FEMA came in late in the game here, right, and decided they wanted to change things," Gov. JB Pritzker said. "And, as you can imagine, there is technology involved in this, there are decisions being made like, well, if we're going to exclude other parts of the state like the collar counties, how are we going to serve them? So there's a lot of discussion going on."

Officials said approximately 40,000 of the 110,000 appointments available were made by Illinois residents over the age of 65 before eligibility was expanded yesterday to some frontline workers and those with underlying conditions. Promoted as a federally-sponsored state-wide facility, the last minute residency requirement was made after it was discovered only 40% of appointments had gone to city residents.

A mass vaccination clinic opens in Aurora, as well as two state run clinics in Carbondale.

A second website is now being set up so that suburban Cook County residents can eventually sign up for vaccine appointments at the United Center as well.

Even Chicago residents are having issues signing up.

Bernie Ferro's daughter tried helping her make an appointment Sunday to no avail.

"I imagine there are a lot of people out there frustrated with this. Especially with the United Center," Ferro said. "They made this big thing so they could take more people and it is a headache to everybody."

ZocDoc, the website used to book appointments, went down when registration opened at 4 p.m. Sunday, then reappeared with changes asking people to confirm their location.

However, residents who live in the city couldn't book an appointment due to the crash and by the time it was back up, the slots were gone.

"She kept trying and then she gave up," Ferro said. "And she said, 'I will try tomorrow' and now I see the time slots are full."

Registration for more appointments at the United Center are expected to open up for Cook County residents in the coming days, according to officials.

Before Sunday afternoon only people over 65 could register.

Despite the issues, starting Tuesday, 110,000 vaccine slots are scheduled to be administered at two United Center parking lots in what will be Illinois' largest mass vaccination site.

The 30,000 square foot facility under half a dozen climate controlled tents begin with a check-in station. After checking in, people with appointments will be led to one of three dozen vaccination stations, all spaced six feet apart with shots administered by a medical team from the 101st Airborne who arrived in Chicago Friday.

Vaccinations also continue at smaller neighborhood centers around the city.

"I got a notification from my church, as a matter of fact, that they would be giving them out at the Golden Dome," said Theresa Hale, who got her vaccine Sunday. "I signed up. It went right through, gave me a date and gave me a time to come in."

Set up as part of the continued effort to get more seniors vaccinated, Garfield Park's Golden Dome served as the third of 11 neighborhood pop-ups scheduled over a 10-day period, with 500 appointments being offered up at each one. The campaign is being run by the City of Chicago in partnership with Jewel-Osco.

"That's really what this program is really. This series it's designed around is to try and get to those hard-to-reach seniors," said Candance Moore, Chief Equity Officer with the Chicago Mayor's Office. "It's going to be harder for them to get to the United Center, or they need someone to call and support them to get there-- so we're putting it right here in the community."

Unlike traditional scheduling systems, which can be confusing and frustrating for many, the city has partnered with community groups, churches and aldermanic offices to directly contact and register people for the pop-ups.

"I lost some friends and just to think about it today, it's still, you know, it's still harsh," said George Nunley, who also got vaccinated Sunday. "Like I said, I'm very happy and grateful."

Monday's pop-up is scheduled for the South Shore neighborhood. Those interested can email seniorsweeek2021@cityofchicago.org to sign up.
Aurora will also host a mass vaccination clinic Monday in partnership with Jewel-Osco and the Kane County Health Department. This will be the second time in a week the suburban city has held a clinic.

The Aurora mass vaccination clinic will open at 8 a.m. Monday at the former Carson Pirie Scott building located at 970 N. Lake Street on the city's west side.

The clinic will provide the first dose of the Pfizer vaccine to 2,400 qualifying people who pre-registered, however, officials said capacity was reached in less than six hours.

The city outfitted the upper level of the vacant 181,000 sq. ft. former Carson Pirie Scott store to serve as a standing mass vaccination site. It will be used as vaccines become more readily available to residents who are in the current priority categories, officials said.

Under the city's Mass Vax Aurora banner, the Aurora mayor plans to announce additional mass vaccination clinics with other partners as early as this week. Information will be posted at www.MassVaxAurora.com.

As for the United Center, shots will be given out starting Tuesday.

The United Center will be the largest vaccine site in the state. 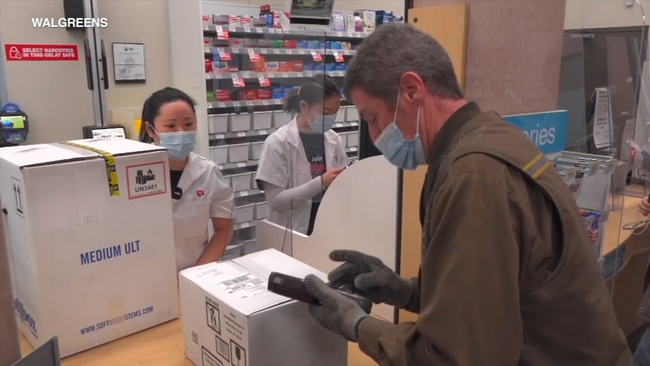 J&J vaccine distribution will slow down 84% next week