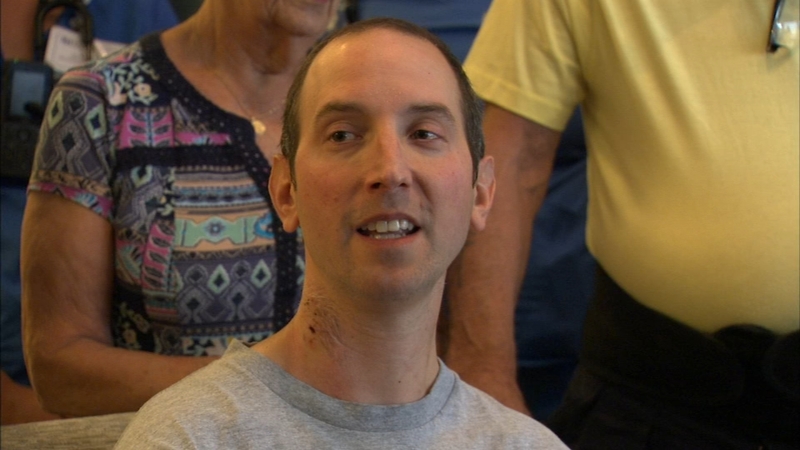 CHICAGO (WLS) -- Marc Lestinsky says every step he takes is a blessing after he got the birthday present of a lifetime.

"I feel like if you have your health, you have everything," he said.

Lestinsky was in danger of losing his life after being diagnosed with heart failure five years ago.

"I felt like a super healthy person," he said. "I led an active life and had no limitations."

He made a choice to pursue his passion for sports, eventually working for a while in sports public relations after surviving non-Hodgkin's lymphoma as a child and enduring 11 months of chemotherapy.

It turns out a long-term complication of his treatment was heart failure, which presented as stomach pains. After a few years of not responding to different medicine, Lestinsky was put on the list for a heart transplant. His doctors said he actually made an ideal candidate.

"The heart was terrible, but everything else was great," Dr. Esther Vorovich said. "A lot of the folks we transplant, we have a heart that's terrible and a lot of other organs that are just so-so."

Last month, Lestinsky was moved up to the top of the list, and on July 31, Lestinsky's 45th birthday, he received the best present ever.

"It was early in the morning, I said, 'Happy birthday,'" said his mother, Rosemarie Lestinsky. "He says, 'Mom, they got a heart.' Well, I just screamed and cried and hollered and cried."

"I just tried to keep focused on each day and not overthink it. But again, for it to be on that day was unreal," he said.

Lestinsky's surgeon said there are 3,000 heart transplants a year in the whole country, so the probability of having a transplant on a patient's birthday isn't very high.

"The odds of somebody getting a heart on their birthday is 1 in a million chance," said Dr. Duc Thinh Pham.

Lestinsky's family is grateful for the donor who gave Marc many more years to live.