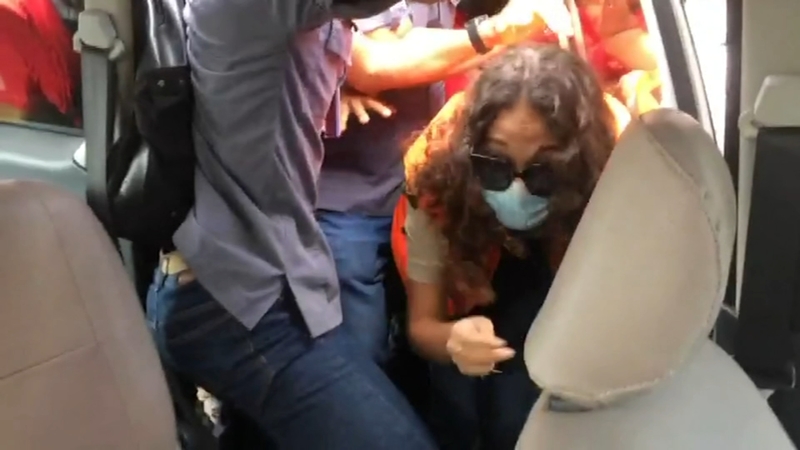 Heather Mack charged with conspiracy upon return to Chicago

CHICAGO (WLS) -- Oak Park native Heather Mack was arrested upon her return to the Chicago area Wednesday after being released from an Indonesian prison, where she served time for helping to kill her mother, stuffing the body in a suitcase.

Mack, 26, was released from prison on Friday after serving seven years and two months of a 10-year sentence. Her then-boyfriend, who was also convicted in the killing, was sentenced to 18 years and remains in prison.

She was taken into custody again as soon as she landed.

Mack originally planned to go to Los Angeles with her 6-year-old daughter Stella before returning to Chicago, but the FBI told her she would instead have to return directly to Chicago.

Mack and her previous boyfriend Tommy Schaefer now face federal charges of conspiracy to commit murder and obstruction of justice.

Mack will remain in federal custody until at least next Wednesday after appearing in a Chicago courtroom today.

"It's a flat out witch hunt," said Mack's attorney Brian Claypool. "The U.S. attorneys are indicting Heather Mack for a crime that she was already prosecuted for in Indonesia."

But is it? Convicted of helping to kill her mother while traveling with her in Bali, the crimes she and Schaefer are now accused of occurred, at least in part, while still in the United States.

"That's what gives the government the jurisdiction to bring these charges and because there's no double jeopardy bar they can do it," said ABC7 Legal Analyst Gil Soffer.

Von Wiese-Mack's family thanked the FBI for their work Wednesday, saying in a statement, ""We have been simultaneously mourning the loss of our beautiful sister Sheila, keeping her spirit alive, assisting in the quest for justice, and advocating for the wellbeing of Stella."

And the child's paternal grandmother, Kia Walker, said she plans to fight for guardianship.

"I would like custody of my granddaughter. I would like the opportunity to provide a safe space for her," she said.

"She has maintained a relationship with Stella. She has had regular contact with her. Kia tried to get guardianship before, when Stella was born," said Michael Goldberg, the paternal grandmother's attorney. "Kia loves her granddaughter. She wants what's best for her. She stands ready, willing and able to care for her and to love her and to be there for her."

Walker came to the airport Wednesday morning, hoping to see her granddaughter, but the girl was whisked away.

Schaefer called Walker as she was leaving the airport, and he declined to comment on the situation.

Walker said she talks to her son twice a week, and he fully supports his mother trying to get custody.

Mack's attorney vowing to fight any attempts to remove the six-year-old from the temporary guardian her mother has selected for her. Mack's immediate problem however will be to fight these charges. If convicted, she faces up to life in prison.

The badly beaten body of her mother, wealthy Chicago socialite Sheila von Wiese-Mack, was found in the suitcase inside the trunk of a taxi parked at the upscale St. Regis Bali Resort in August 2014.

Mack, who was almost 19 and a few weeks pregnant at the time of the incident, and her then-21-year-old boyfriend, Schaefer, were arrested a day after Wiese-Mack's body was found after they were found at a hotel about 6 miles from the St. Regis.