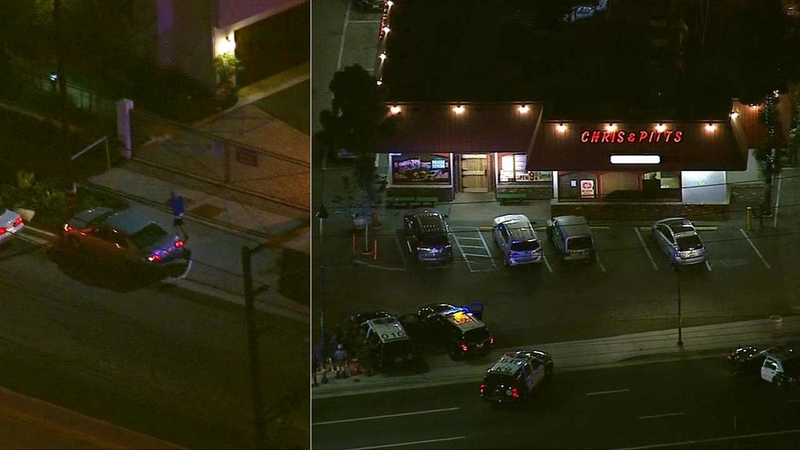 DOWNEY, Calif. -- An armed carjacking suspect who led sheriff's deputies on a high-speed chase from Pico Rivera to Downey and then ran into a restaurant was pronounced dead Thursday night following a shooting involving a Los Angeles County sheriff's SWAT team.

California Highway Patrol officials tracked the suspect down using a LoJack system near Whittier and Paramount boulevards in Pico Rivera at about 6:30 p.m.

Authorities were surveilling the male suspect's movements by helicopter when they witnessed him crash the alleged stolen vehicle and carjack a 21-year-old woman in the 11400 block of See Drive in the unincorporated area of Whittier, Sheriff's Cmdr. Mike Parker said.

Guadalupe Zamarripa was allegedly unloading stuff from her mother's Toyota Camry when she was held up at gunpoint and carjacked.

The suspect then led authorities on a high-speed chase through neighborhoods in Montebello, Monterey Park, East Los Angeles and Commerce. During the chase, the driver could be seen speeding through stop signs on surface streets and driving on the wrong side of the road.

The suspect ran red lights and nearly crashed into other motorists several times, Parker said. He eventually crashed after a CHP officer caught up to the vehicle and performed a PIT maneuver near Lakewood Boulevard and Gallatin Road in Downey.

He fired shots into the air as he bailed on foot and ran inside Chris & Pitts BBQ restaurant in the 9200 block of Lakewood Boulevard, Parker said. Los Angeles County sheriff's deputies completely surrounded the building and evacuated at least 70 patrons.

Dozens of people, including children, walked quickly but cautiously out of the restaurant. Those who were evacuated told authorities the suspect did not want to hurt them, but confirmed he was armed with a semi-automatic weapon.

A SWAT team threw a flash-bang grenade inside the restaurant and made their way inside shortly before 9 p.m, and a barrage of gunfire was then heard. Sheriff's deputies said at least four hostages were being held against their will inside the restaurant, and they shot at the suspect once he separated from them.

The wounded suspect reached for his weapon while on the floor, and sheriff's deputies opened fire again, killing the suspect.

At least two men were escorted out of the restaurant in handcuffs as a precaution. No further details were immediately available.