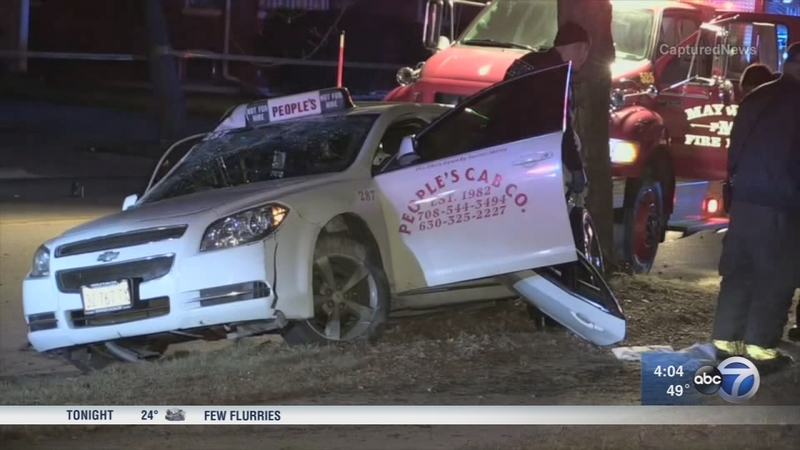 MAYWOOD, Ill. (WLS) -- A brother and sister died together in a white taxi left twisted and mangled by a hit-and-run driver outside their parents' home in west suburban Maywood.

"I did see her smile as she was laying in the car. Her eyes were closed, but I knew that my daughter was dead," said Cathy Shelton, the victims' mother.

Shelton ran out of her house in the 1100-block of South 9th Avenue early Tuesday morning, only to see her son and daughter's last moments.

"When she was in the cab, she was crying. I heard her crying and I couldn't open the door. It was stuck together," said Earnest Shelton, who tried to save his siblings.

Martrail Shelton, 25, got to the home around 3:45 a.m. to take his sister, 22-year-old Charlaine Shelton, to work. They were just pulling out of the driveway when a speeding 2004 GMC Envoy smashed into them, police said.

"This morning, I was getting my daughter off to work. She was going to work. My son comes. He's a cab driver for People's Cab. He comes to get my daughter. This was her first day working mornings. She walked out the door, got in the cab. Me and my husband were sitting on the bed. Next thing I heard was a loud boom. My husband ran outside. My son was pinned right here to this tree," Shelton said.

The driver of the SUV bailed out and ran, police said.

"The truck caught on fire. That's when the lady had the audacity to jump out and run away from the scene of the crime," said Anthony Johnson, the victims' father. "She fled the scene of this crime. She never looked back. She just jumped out and kept running."

But police said they were able to find the 24-year-old woman, who is from Maywood, and take her into custody after a brief altercation. Charges are pending against her. Investigators are working to determine whether alcohol played a role in the crash.

The victims were rushed to Loyola University Medical Center, where they later died.

Cathy Shelton and Anthony Johnson said they never thought Tuesday would be the last day they would see two of their seven children. Charlaine was excited to be in an upcoming gospel play and had hopes of being a nurse. Martrail had worked for People's Cab Co. for three years and had dreams of owning his own business.