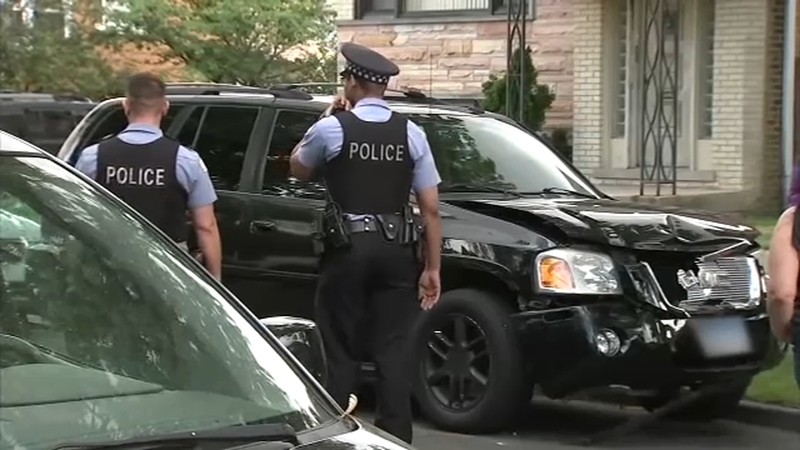 CHICAGO (WLS) -- A frustrated family is looking for answers as to why no arrests have been made for the hit-and-run crash that killed Nicolas Garcia, Jr., even though the vehicle involved was found just blocks away from the scene.

Garcia, Jr., was killed the night of July 4 in the 4900-block of West Diversey Avenue at about 9:35 p.m. Police said he was on his motorcycle when he was rear-ended by a black SUV, was ejected from his bike and struck a pole.

"That picture is still in my head," said Maribel Orneles, victim's sister. "The way my brother was just laying there."

She still relives the painful moments when she had to identify the body.

"My dad was devastated. My brother, too," she said.

The 36-year-old, who was known to friends as "Chato," was riding with a group of motorcycles at the time of the crash. The group got a good look at the SUV they said hit him. They then found the GMC Envoy parked just a few blocks away from the scene and called 911.

The car is now the main evidence in the case.

But after three weeks there has been no arrest.

"We are all frustrated, what is going on," Orneles asked.

Chicago police told ABC 7 they are still processing the vehicle. The department would not say if their detectives have questioned anyone in connection to the hit-and-run, or if they have identified the owner of the car. The family would like those answers soon.

"There are a lot of cases they do right away and this one is like they are ignoring it," said Orneles.

Garcia's family said they did not plan to play detective, but will do whatever it takes to find the driver.

"Why would you do that to an innocent person that did not hurt anyone?" Orneles wondered. "He did not even hurt a fly."