WLS
CHICAGO (WLS) -- The five-day Tall Ships festival returns to Navy Pier on Thursday, and will feature 14 vessels from around the world.

On Tuesday, four of the ships were already docked, including the When and If, of Key West, Fla., which gives a peak into World War II history and General George Patton. The old schooner has three sails and a six-person crew.

"She was commissioned in 1938 and built right after and she was launched in 1939," said Seth Salzmann, captain of When and If.

The boat has quite a history. It was built for General Patton and stayed his family until 1972.

ABC7 reporter Frank Mathie boarded the When and If ship on Tuesday. And as a gentle southwest breeze blew, he asked the age-old sailing question: What's the difference between furled and unfurled sails?

Crew member Jenny Corcas said "furl the sails" means to bring them down and fold them up. Unfurling them is the opposite.

When and If is 77 years old now and is in spectacular shape. Its spectacular history - and its name -- goes all the way to Gen. Patton, and his wife Bea.

"He used the term in a letter to the builders. He said, 'Do you want us to continue building the ship?' and he said, 'Yes. Build the ship and name it When and If. When the war is over and if I return, Bea and I are going to sail around the world."

However, he didn't make it back to sail around the world.

The festival is expected to draw as many as 1 million visitors between Thursday and Sunday. Cost is $10 to look, $25 to board and $80 to go sailing. 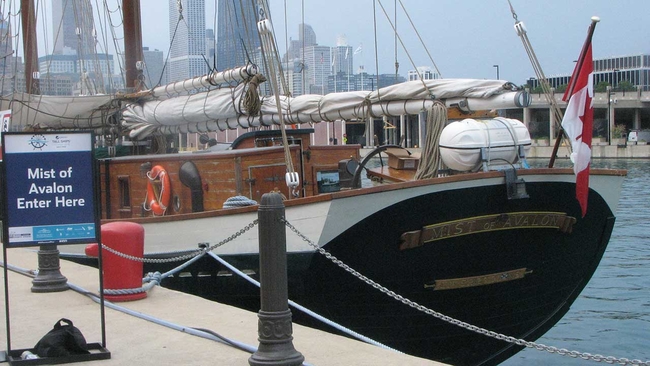