Travelers not deterred by crowds at O'Hare, Midway 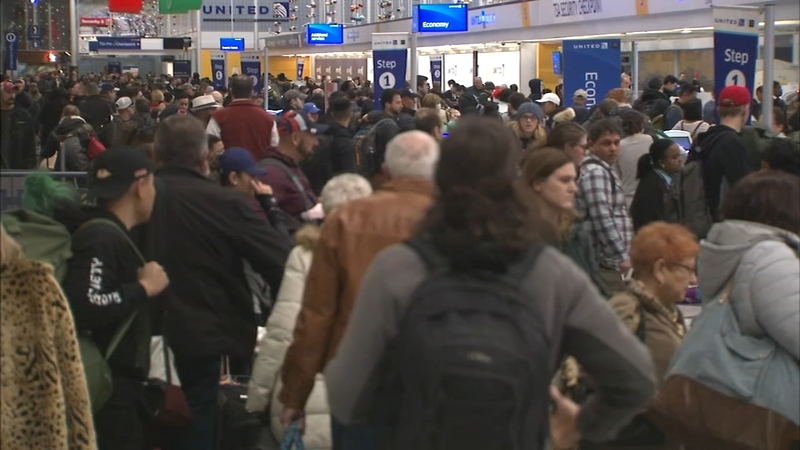 CHICAGO (WLS) -- Friday is expected to be one of the busiest travel days of the year ahead of the holidays.

A record number of more than 112 million Americans will be traveling this holiday season, and 240,000 of them will be going through O'Hare. That's about a five percent increase from last year, so expect things to be busier if you are leaving out of one of the two major airport in this area.

The United terminal at O'Hare has had long lines since 5 a.m.

"Very busy in the house, getting the kids ready, getting everybody up and ready and get out the house so, it was very, very taxing," said traveler Douglas Harrell. "But that's the tough part, now we go to the fun part."

One family at O'Hare woke up and showed up hours early to make sure they made their flight with no complications.

"I am so excited that I can't even believe that we're here at the airport," said passenger Brayan Mejia.

Brayan Mejia's father, Yovanis Mejia, said the family was up until 1 a.m. to pack for their trip.

Lines became shorter as the day went on, but some passengers had other problems - such as a too-heavy suitcase.

"For the local flights, we must only have 50 pounds, and this suitcase is 59 pounds," said traveler Nancy Aburi.

Aburi's suitcase was approved to fly after she shifted some of her things into a plastic bag.

Other travelers made provisions to keep their kids occupied during the wait.

Over at Midway, representatives said they are expected to get more than 70,000 passengers, about a two percent increase.

It's not just the airways that will see more travelers, but also roadways. AAA predictions some 5.3 million people in Illinois will be on the roads thanks to low gas prices and a decent economy.
Later Friday, United will be offering comfort dogs for weary travelers and over at Midway, an off-site airport parking provider Fast Park plans to host yoga and meditation sessions for guests.

"So we have the Great Lakes mass exodus that's where everyone even the staff working there go out for I think 15 days," said Seaman Apprentice Joseph Cruz.

Cruz said he's headed to California before he is deployed to Japan.

"My grandparents don't know I am coming yet, so I get to surprise them," Cruz said.

Low gas prices also contributed to a record-breaking traveling season on the roads.

As of 5 p.m. on Friday, some Amtrak and Greyhound routes were also experiencing delays.