Know your rights as an airline passenger ahead of holiday travel 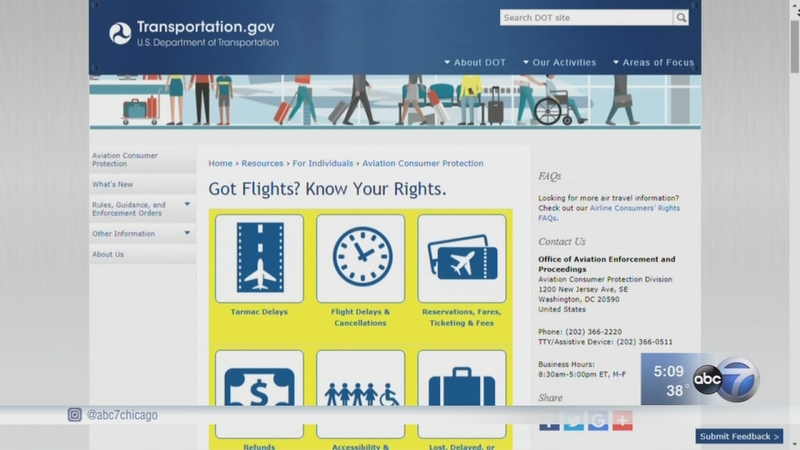 Know your rights as an airline passenger ahead of holiday travel

CHICAGO (WLS) -- As we head into the busy holiday travel season, it's important that you know your rights as an airline passenger, from tarmac delays to taking video.

The Chicago attorney who represented Dr. David Dao, whose forcible removal from a United Airlines flight in April was seen around the world in a viral video, said he has seen some improvements for air travelers since the incident.

"I believe there has been a successful effort on the part of airlines to be more sensitive, to be more empathetic," attorney Tom Demetrio said.

United settled a lawsuit with Dao.

Demetrio recommends passengers follow directions from airline personnel and use cell phones only when it is deemed safe.

"You are allowed to use your phone until you're told not to. So you have to remember, the rule is you need to follow the direction," Demetrio said.

In May, American Airlines sent guidance to their personnel advising, "American has a policy asking customers not to film onboard or at airports, but there is no federal law or regulation that prevents it. Nor will law enforcement require customers to delete photos or videos they've taken."

Expectations of personnel and passengers were more clearly laid out in the U.S. Department of Transportation's air rights policy that was updated after Dr. Dao's incident. It states:

"Airline have learned that when people are on the plane, at that point it's very tough to shift things around," said Joe Schweiterman, DePaul University transportation professor.

Schweiterman sees more emphasis on dealing with seating issues before boarding, so flights are boarding earlier.

"If you're arriving 12 minutes before your departure, you're rolling the dice. Those doors are going to shut pretty quick," he said.

Southwest Airlines asks passengers to ask personnel before videoing them.

United Airlines policy states photographing or recording other customers or airline personnel without their express consent is prohibited.

Delta Airlines did not respond to ABC7's request for comment.

In general this holiday season, expect to see more full flights and airlines being strict with carry-on luggage.