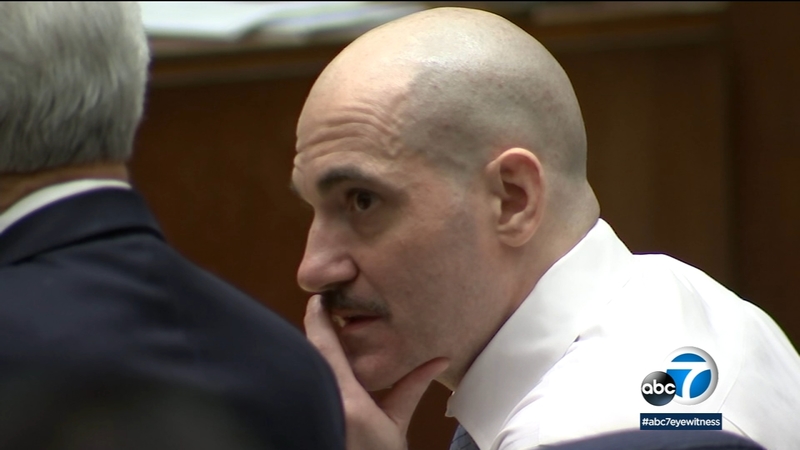 LOS ANGELES -- A Los Angeles jury has recommended the death penalty for the man dubbed "The Hollywood Ripper" who was convicted of the killings of two women and the attempted murder of a third.

The jury's decision in the case of 43-year-old Michael Gargiulo was read in court Friday afternoon.

In August, the same jurors convicted Gargiulo of the killings including the 2001 murder of Ashley Ellerin on a night she was to go out with actor Ashton Kutcher, who testified at the trial.

The surviving victim and Gargiulo's teenage son were among those who testified in the penalty phase.

Prosecutors also assigned Gargiulo the "Boy Next Door Killer" moniker because he lived near all the victims and watched them.

During trial, the prosecution portrayed the 43-year-old repairman as a psychopath who posed as a nice guy.

Gargiulo was married, had a family, and knew the difference between right and wrong as demonstrated by his techniques to hide evidence. The father of two ingratiated himself to young women who lived nearby, then returned with a knife to kill and mutilate them.

The number of wounds were displayed from the coroner's report. Ellerin was stabbed 47 times. Maria Bruno, a mother of four, was stabbed 17 times.

The destruction of the victims' families punctuated the prosecution's points.
"Ashley Ellerin now sits in an urn on their mantle thanks to Michael Gargiulo," stated Dameron.

Prosecutors say the defendant understood what he was doing and used gloves and booties over his shoes to hide his trail. He was caught after he was cut during a 2008 attack in Santa Monica. His DNA linked him to the 1993 murder of Glenview teenager Trisha Pacaccio.
Report a correction or typo
Related topics:
glenviewtrialmurderhomicideu.s. & worlddeath penaltyserial killer
Copyright © 2022 KABC Television, LLC. All rights reserved.
TOP STORIES
Death toll rises to 21, mostly children, in TX school shooting
Uvalde school shooting: What we know about 19 kids, teacher killed
Republican candidates for Illinois governor face off in 2 forums
Father of Texas yoga instructor accused in cyclist's murder speaks out
Chicago expected to move to 'high' COVID level by Friday, Arwady says
Gary teen killed in shooting identified by family
Chicago Weather: Showers and storms Wednesday
Show More
Woman shot near CTA Red Line stop on South Side
Biden says 'we have to act' after Texas school shooting
1 killed in 10-vehicle crash on I-294 in Glenview
Long COVID symptoms mainly affect women in their 40s, study finds
Watch Steve Kerr's raw, emotional plea after Texas shooting
More TOP STORIES News