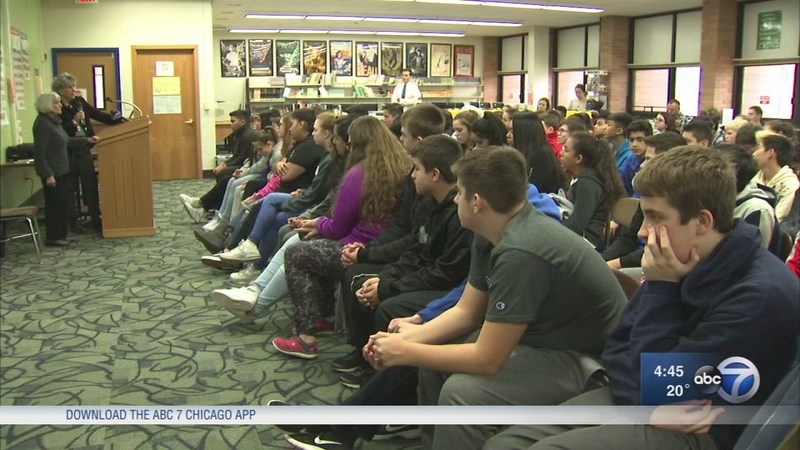 DES PLAINES, Ill. (WLS) -- As the debate over immigration in the United States raged on, author Fern Schumer Chapman spoke to students Friday about an immigrant story very important to her - her mother's childhood flight to Chicago from Nazi Germany.

Schumer Chapman's mother was one of the few children saved from the Holocaust and admitted to the United States.

"These kids are called the 1,000 children...and my mother was one of these one thousand children," Schumer Chapman said.

Eighth graders at Algonquin Middle School in Des Plaines heard Schumer Chapman's story Friday and got to meet her mother, 92-year-old Edith Westerfield, in person. The pair were able to visit the school thanks to a grant from the D-62 Education Foundation.

"If you ever encounter a new student, be friendly...help them adjust...and I think you'll make a great friend," Westerfield told the students.

Chapman told the students about Westerfield's experiences, including the murder of her parents, her journey from Germany and the other traumas she faced as a Holocaust survivor.

"That was really brave, because she like...she stayed strong throughout the whole time," said Algonquin Middle School student Larelle Potts. "And that takes a lot of confidence to do that."

"It was really inspiring and motivating and just really interesting, because I never would have though...like...it was possible," said student Nasira Miyazawa.

Westerfield said that she is shocked by the current state of programs like DACA and other immigrant protections.