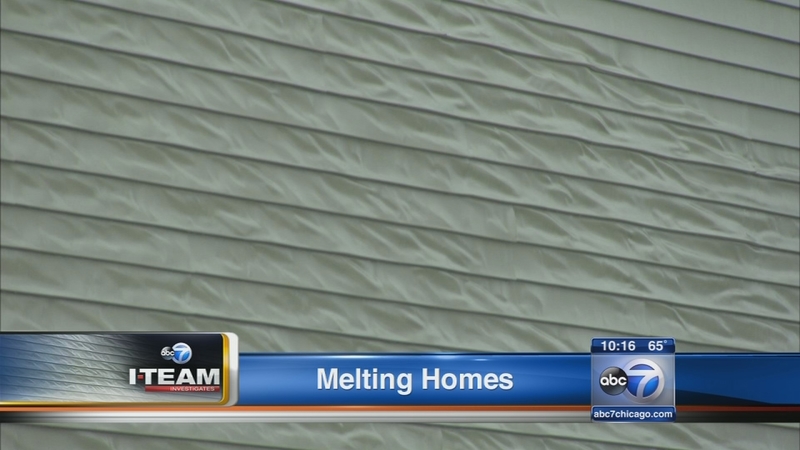 LOMBARD, Ill. (WLS) -- After their dream homes began literally melting before their owners' eyes, upset homeowners contacted the I-Team about an unsightly defect plaguing their neighborhood.

It's an unusual situation where the siding on homes heats up, becoming wavy and warped. It's a cosmetic issue, but some residents worry the damage could lead to more serious problems down the road.

Syed Waliuddin thought he was buying his family dream home for $458,000. It was new construction in west suburban Lombard in 2010. But now his frustration and his vinyl siding are bubbling up.

"When you put your hand across it you can feel it, bumpy, wavy," he said.

Waliuddin says the developer told him to file a warranty claim with the manufacturer of the siding - which was denied - the manufacturer telling the I-Team that it doesn't cover damage caused by outside sources. Homeowner's insurance also denied the claim.

"It's quite depressing and I'm scared that it's going to spread and extend up," said Syed Ali, Waliuddin's neighbor across the street.

Ali says the melting of his siding started about nine months ago.

"I'm concerned about the structure of the house and I have young kids, if moisture comes in, we may get mold," Ali said.

Residents like Ali and Waliuddin believe 10-year warranties on their homes should cover the damage. They've been working with the homeowners association and the developer, Pulte Homes.

Pulte Homes says the warranty does not apply to "thermal distortion," which "occurs in rare instances with a precise combination of sun direction during a certain time of year, along with the particular direction the home is facing. This exact combination cannot be reasonably foreseen nor prevented."

Pulte says the problem is the sun bouncing off the energy efficient windows from one home and melting the siding on another.

The company, headquartered in Atlanta, says "the siding and...windows perform individually as intended." And the windows are "mandatory to comply with local and state building codes."

"The siding companies are diverting the blame because they're saying, 'Well, our product is designed as such, and when the temperatures are greater than that, it's going to melt.' They're deflecting it to the windows and the windows are saying the siding should be stronger. The builders kind of in the middle," said Vic Mauhar, president of the homeowner's association.

Mauhar showed the I-Team two other homes where the siding is warping - and there's a third where the siding has been replaced three times. Twice the homeowners say Pulte paid and supplied their neighbors with special screens to minimize window light reflections.

The developer has been dealing with complaints of melting siding from North Carolina to Minnesota. In those cases, Pulte homes says it replaced the siding because it was within the homeowners' two-year siding warranty period.

"As you can see, the whole thing is melting from top to bottom," Waliuddin said.

Back in Lombard, there's no word if Pulte will be helping Ali or Waliuddin.

"It's giving such an ugly look. More than the look, I'm kind of worried about the safety issues, what's going to pose in the future as it continues to melt," Waliuddin said.

The Vinyl Siding Institute says this problem is not limited to vinyl siding and that, even when distorted, it's safe and not toxic.

Pulte also told the I-Team that this is not limited to its homes, and that thermal distortion is a national issue which siding and window manufacturers need to address.

If you're buying a home, ask the builder if the siding will hold up against the sunlight reflecting from windows.