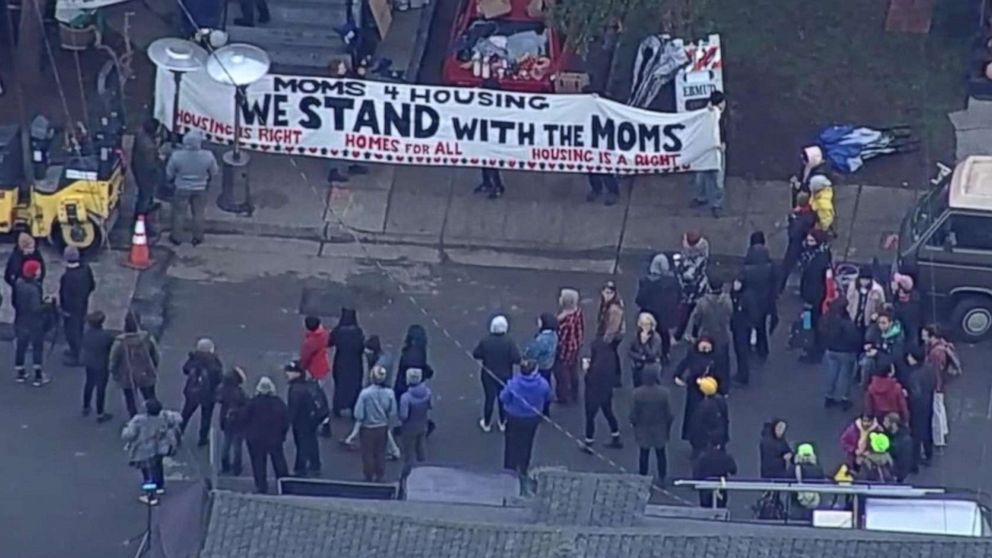 ABCNews
By JULIA JACOBO
A group of homeless mothers who refused to leave a vacant home they were squatting in with their children, were evicted amid the growing homeless crisis in California.

The mothers and their children moved into the home on Magnolia Street on Nov. 18 and continued to live there, despite a judge issuing an order on Friday for them to vacate, ABC San Francisco station KGO reported.

On Tuesday morning, the Alameda County Sheriff's Office enforced the eviction notice on the squatters. Four adults, including two women, were arrested, Sgt. Ray Kelly, public information officer for the sheriff's office, told ABC News. There were no children at the home at the time.

A heavy police presence surrounded the home Monday after dozens of protesters arrived to show their support for the mothers, even creating a human shield at one point to prevent the eviction.

The mothers were being backed by advocacy group Moms 4 Housing, an organization for homeless mothers and those struggling to find or retain housing.

According to the group, there are four times as many empty homes in Oakland as people without homes.

"No one should be homeless when homes are sitting empty," the organization's website reads. "Housing is a human right."

The home was bought by Southern California investment firm Wedgewood over the summer, which planned to flip the property.

A spokesperson for Wedgewood told KGO that the company had offered to pay for housing for the women and their children for two months through Catholic Charities.

But, Moms 4 Housing rejected the offer, characterizing it as an insult on Twitter over the weekend.

Neighbor Shanna Silva told KGO that she believes the women were "trying to prove a point" and that they should be allowed to stay.

"I don't agree with this breaking into somebody's property," she said, adding, "I believe they should be able to stay."

On Tuesday, Wedgewood released a statement saying that the company is "pleased the illegal occupation of its Oakland home has ended peacefully," according to KGO.

"We will now work with a non-profit, Shelter 37, to renovate the home giving opportunities to at-risk Oakland youths and splitting the profits with the non-profit so that other youths may benefit," the statement read. "The solution to Oakland's housing crisis is not the redistribution of citizens' homes through illegal break-ins and seizures by squatters."