WLS
HOMER GLEN, Ill. (WLS) -- A Homer Glen man has been charged with a hate crime after Islamaphobic graffiti was found outside a family's home.

Police said on Monday, 26-year-old Patrick Goshorn, Jr., spray painted a message that appeared to mock the Muslim phrase "peace be upon him."

After responding to a report of hostile behavior, police arrested Goshorn Tuesday evening and he was charged with disorderly conduct.

On Thursday, Will County Sheriff's deputies searched Goshorn's home and found a can of "leather brown" spray paint in the attached garage. After being interviewed by detectives, he was charged with criminal damage to property and criminal damage to state-supported property.

After a review by the Will County State's Attorney's Office, Goshorn was also charged with criminal defacement of property and a hate crime.

"We thank the Sheriff's office for their professional and swift investigation and the Will County State Attorney's office for taking this unfortunate incident seriously. Hate crimes are a serious offense that do not only threaten public safety but also cause a victim immense psychological distress," Ahmed Rehab, executive director of the Chicago office of the Council on American-Islamic Relations , said. "The family ultimately wishes for the rehabilitation of their offender, and our advocating for leniency is not out of the question pending his cooperation to rehabilitate. However, it is imperative that hate crime statutes be fully observed to send a strong message that such acts will carry grave consequences and deter repeat. The safety of the family and other potential victims remains our first priority."
Report a correction or typo
Related topics:
homer glenmuslimshate crimegraffitivandalismislam
Copyright © 2020 WLS-TV. All Rights Reserved.
RELATED 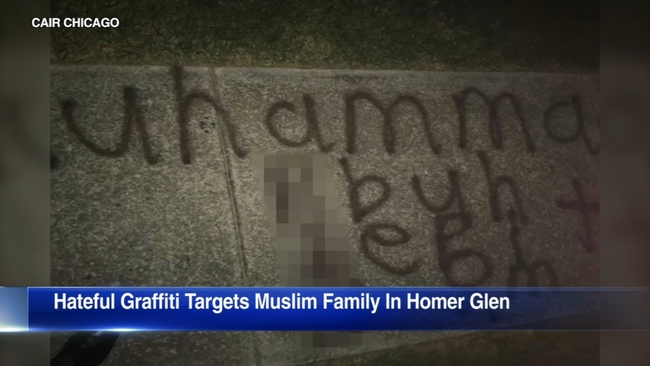