Family friend confesses to fatal hit-and-run of boy, 5, at child's home, then turns self in 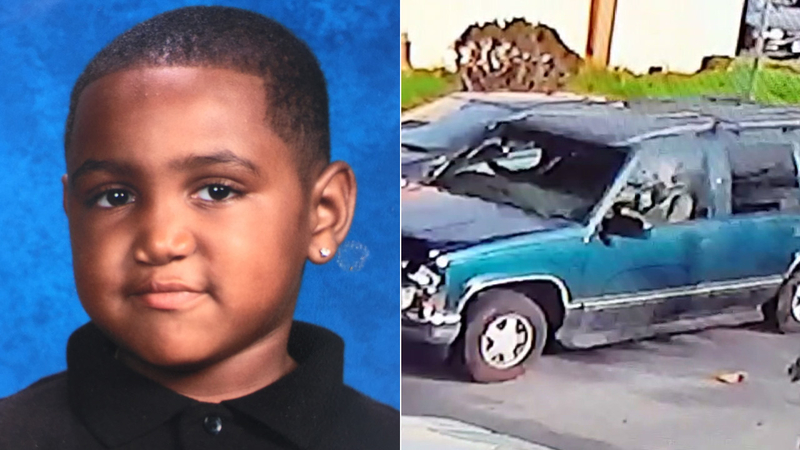 LOS ANGELES -- Authorities arrested the driver connected to a hit-and-run that killed a 5-year-old boy in South Los Angeles.

Police said the man walked into the LAPD's 77th Division Station and turned himself in. He was interviewed by police to determine if he was the driver.

Family members told Eyewitness News that the suspected driver, identified as Homer Watford, 19, came by their home to apologize for what he had done before turning himself over to the LAPD. They said he was a family friend.

Authorities said the passenger in the car, Eric Roberts, 20, Watford's cousin, came to the station as well. Both men were interviewed.

Watford was then booked into the 77th Regional Jail on suspicion of felony hit-and-run.

Earlier on Wednesday, the boy's family members pleaded with the driver to surrender during an emotional press conference.

Ronald Neal III was running across 82nd Street at Towne Avenue when he was struck by a green Tahoe or Suburban on Tuesday at 5:15 p.m. As the boy was still on the ground, the vehicle struck him a second time before fleeing, according to LAPD Officer Ruben Mendoza.

"Ronald was my baby. I liked to call him Butt Butt. I just want whoever did this to turn yourself in, please," Jaychele Turner, the boy's mother, said through her tears. "Butt Butt was a good kid ... he was doing good in school. I'm just going to miss him."

Watch family members speak at a press conference in the video below.

Jaychele Turner, the mother of a 5-year-old boy killed in a hit-and-run, speaks during a press conference on Wednesday.

Authorities said the young boy died at the hospital with his mother by his side.

Turner said someone told her the boy may have been trying to save or get a dog.

"I know for sure he would not be crossing the street with a friend at all, so he could have been saving a dog or grabbing a neighbor's dog," she said.

One witness, who was standing about 40 feet from the incident, described the driver as a male black, 19 to 25 years old, medium to dark complexion, wearing a gold chain and white T-shirt.

Mendoza said investigators believe the suspect is from the area.

"We want to arrest this individual as soon as possible," he said.

The speed limit in the neighborhood is 25 mph, and police said the driver was going about 45 mph.