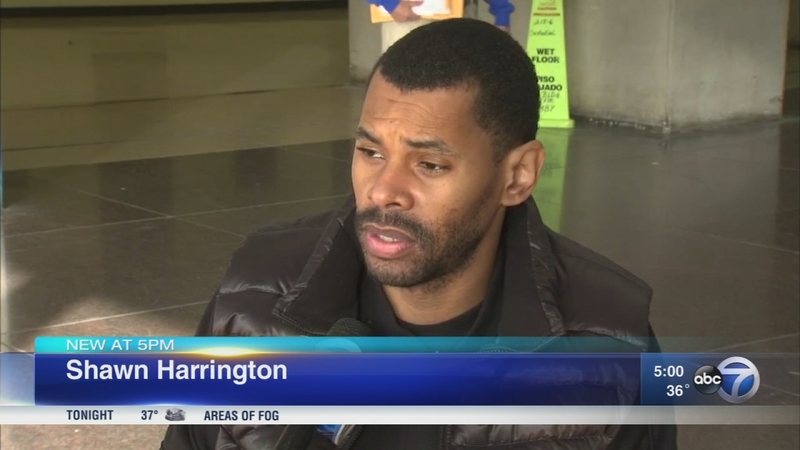 CHICAGO (WLS) -- The star of the "Hoop Dreams" film testified Wednesday in the trial of two men accused of shooting and paralyzing him in 2014 as he took his daughter to school.

Shawn Harrington, 39, now a Marshall High School basketball coach in a wheelchair, shielded his daughter during the shooting, which occurred in the city's Humboldt Park neighborhood.

On Wednesday in court, Harrington identified the pair of accused shooters sitting across from him -- Cedryck Davis and Deandre Thompson. Both are charged with attempted first-degree murder and aggravated battery.

He testified he was driving his then-15-year-old daughter, Naja Harrington, to school when he "came around a corner and saw two men pointing in my direction." The jury saw video of the scene from police cameras, and Harrington admitted under cross examination he didn't get a long look at his assailants. He said he did look around as he threw his body over his daughter.

"No doubt in my mind that those are the guys on the tape that fired the shots at my car that morning," Harrington said.

Police said Harrington's rental car was mistakenly identified by the shooters as belonging to someone who three days earlier shot at an associate of the defendants.

"My client wasn't there when this occurred. There is one witness who casually sees who they think is him, and that's not enough to find somebody guilty," said attorney Mark Gottreich, who represents Thompson.

Naja Harrington, now 18, was also quizzed on the stand about being sure the man she identified in a police lineup as Davis was the man in court and that Chicago police detectives didn't lead her to that conclusion.

The defense also questioned the testimony of state witness Charles Mollette who prosecutors said signed a written statement saying Davis was one of the shooters.

However, Mollette -- who's serving a five year sentence on state drug charges -- denied even being interviewed by prosecutors, even though they showed pictures of him doing that at

"Well, that's exactly why the state's attorney should never have called him in the first place. Because he's not credible," Gottreich said.

Meanwhile, Harrington said he's relieved his part of the trial is done and looks forward to being done with medical leave so he can get back to coaching.

"It's been almost three years and I'm mentally so far past this. So to come back and revisit it is kind of a mental set-back," Harrington said.