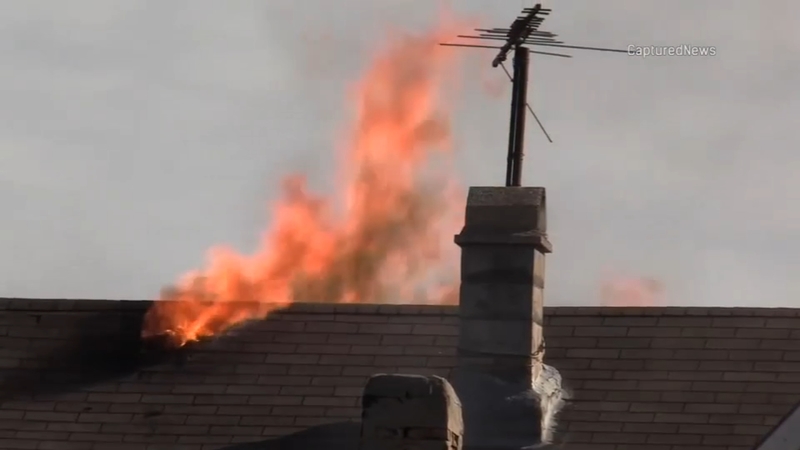 No smoke detectors found in East Side house fire

CHICAGO (WLS) -- A 69-year-old grandfather was critically injured Sunday night after a house fire in Chicago's East Side neighborhood.

The man took out a window and threw his 7-year-old grandson from the second floor to Chicago police officers who caught him on the ground.

Just before 4 p.m. Sunday, the grandfather and his grandson were trapped on the second floor of the house, located in the 10000 block of South Avenue L, as fire spread through building.

The boy was transported to Comer Children's Hospital where his condition was stabilized, authorities said.

A firefighter was hospitalized for exhaustion but expected to be OK.

Two families lived in the coach house. A family of six who lived on the first floor were not at home when the fire broke out, but their dog was killed in the blaze.

Authorities said they did not find working smoke detectors in the fire.

CFD: NO SMOKE DETECTORS IN OVER HALF OF FATAL FIRES

There are no working smoke detectors in three out of every five fatal fires in Chicago, according to CFD Deputy District Chief Walter Schroeder, head of the city's fire safety education program.

And while in rental units it's the landlords' responsibility to provide them, residents must test them frequently to make sure they're in working order.

"What does that mean? Testing it on a monthly basis. Making sure that battery is changed, if it's a replaceable battery twice a year," Schroeder said.

On Friday, CFD gave out 1,500 smoke detectors in Little Village, the neighborhood where 10 children died following a house fire two weeks ago.

Schroeder said low-income residents can get a free smoke detector anytime by either calling 3-1-1 or going to their local alderman's office. The American Red Cross also provides them and will even install them for free.
"Smoke detectors and CO detectors should be placed within 15 feet of areas used for sleeping purposes and on every level of the home. That's where should be making sure that you have one and making sure that they work," Schroeder said.

The number of fire-related fatalities in Chicago is up dramatically. So far in 2018, 41 people have died as a result of fires. Last year, 27 people died in the entire 12-month period.

"It's not only your safety. Your family, your kids, your loved ones that are in the home with you. It's your loved ones, your kids that are in the home with you. Not knowing and not testing that. It really isn't something you can put to the test. Not having a working smoke detector. We know smoke detectors save lives plain and simple," Schroeder said.
Report a correction or typo
Related topics:
chicagoeast sidebuilding firerescuefire rescuechicago fire department
Copyright © 2022 WLS-TV. All Rights Reserved.
TOP STORIES
3 killed, 'multiple' injured when Chicago-bound Amtrak train derails
Fox News analyst says brother killed in Morgan Park shooting
Man shoots, kills Subway worker over too much mayo on sandwich: police
WeatherTech shooting victim was planning wedding, family says
Chicago weekend shootings leave 24 shot, 5 dead, including 5-month-old
National HIV Testing Day: Free screenings offered at some Walgreens
'Biblical' Mormon cricket swarm hits U.S. West
Show More
COVID Update: IL reports 3,997 new cases, zero new deaths
4th of July fireworks displays across Chicago area | See full list
Target, Walmart weigh paying you not to bring back unwanted items
Woman killed sister, asked 13-year-old son to help dump body: records
3 shot in Lakeview East after Pride festivities
More TOP STORIES News