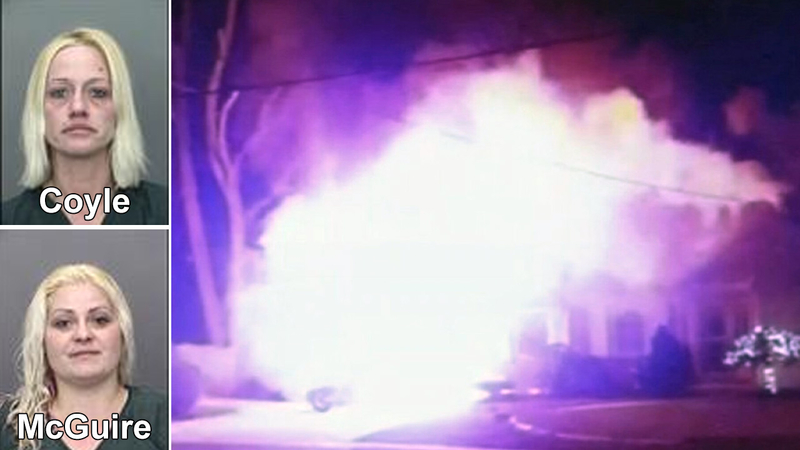 WASHINGTON TWP., N.J. -- Police say two women set a fire in Washington Township, New Jersey on Thursday night after what was apparently an unsuccessful attempt to kidnap a small child.

Prosecutors say the women tried to abduct McGuire's 3-year-old daughter from the child's grandparents' home in the 800 block of Lafayette Court, where the girl was staying with three of her siblings.

Police say McGuire's children werein the custody of the grandparents, and she intended to get the children back. When she failed, police say she set the fire to force the family members out of the home.

After they ran outside, McGuire and Coyle allegedly took the 3-year-old and tried to get away.

Washington Township Police arrested both women a short time later at Route 42 and Fries Mill Road, about a mile from the Lafayette Court home.

Prosecutors say evidence collected from the fire scene is being tested.

Arson investigators with the U.S. Bureau of Alcohol, Tobacco and Firearms (ATF) were expected at the crime scene Friday.

The grandparents and children all escaped the fire unharmed.

The Gloucester County chapter of the American Red Cross helped find housing for them.

Neighbors described a chaotic scene that unfolded Thursday night after the fire broke out.

They told Action News the grandmother ran out of the home with the grandchildren, screaming for help.

"We just heard yelling and carrying on, so when we opened up our door and realized the house was on fire, so we called 911," said Jeanne Rybyinski.

"It's terrible, I mean, we're two weeks before Christmas," said Aubrey Rybyinski. "The house looks like it's going to be a total loss. It's heartbreaking."

Officials said it took crews more than a half hour to get the fire under control.