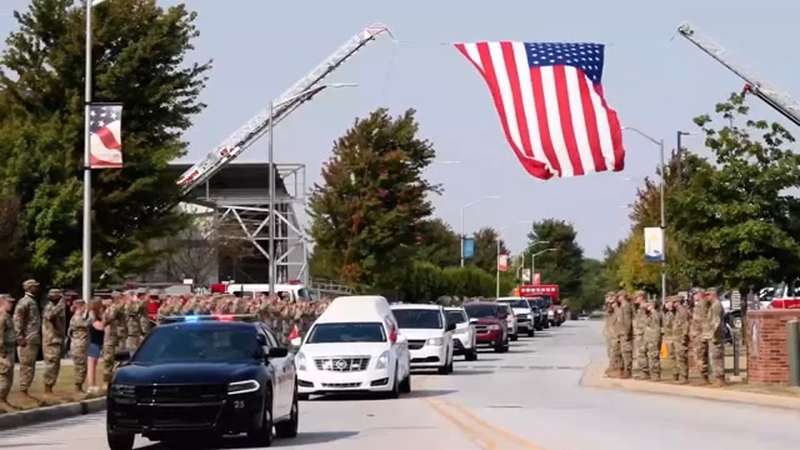 LOGANSPORT, Ind. -- A U.S. Marine from Indiana who was killed during the frenzied evacuation at Afghanistan's Kabul airport was hailed Tuesday as a hero during a funeral in his hometown.

"No one will ever say it better than his mother did," said Pence, a former Indiana governor, speaking near Sanchez' flag-covered casket. "In those final moments of his life, it was a work of heart, doing everything he could to get those kids out of harm's way."

Between speakers, a younger brother, Ariel Loran, played The Marines' Hymn on a saxophone.

A Marine chaplain, Capt. Blake Campbell, said Sanchez, 22, was working security at the U.S. embassy in Jordan when he was transferred to the Kabul airport. He was among 13 U.S. service members killed Aug. 26 in a suicide bombing during the U.S.-run evacuation.

"We grieve the loss of a son and a brother and a friend," Campbell told the congregation. "And this town, this church, this community grieves with you."

Burial was planned at Mount Hope Cemetery. The service capped days of heavy emotion in the northern Indiana community. Sanchez, known as Bert, was among 17 members of his Logansport High School class who joined the military after their 2017 graduation.


He played on the soccer team and was part of the homecoming court during his senior year. Sanchez, the son of Mexican immigrants, was the first member of his immediate family to be born in the U.S., said Zach Szmara, pastor of The Bridge Community Church in Logansport.

He described Sanchez as a "bridge builder."

"His presence brought vibrant color into parts of life that were gray and dull," Szmara said. "If he wasn't in the classroom that day or didn't show up at the event, you could sense it. You wanted him around, whether it was a quinceanera or a cookout, a classroom or Christmas Eve."

After his body arrived Sunday in Indiana, thousands of people lined roads for miles to honor Sanchez, saluting and holding American flags.

"I'm told he never gave up until the job was done," Pence said. "He stayed at his post, stood in the gap. ... He gave his life defending innocent civilians fleeing from the chaos that had become Afghanistan."