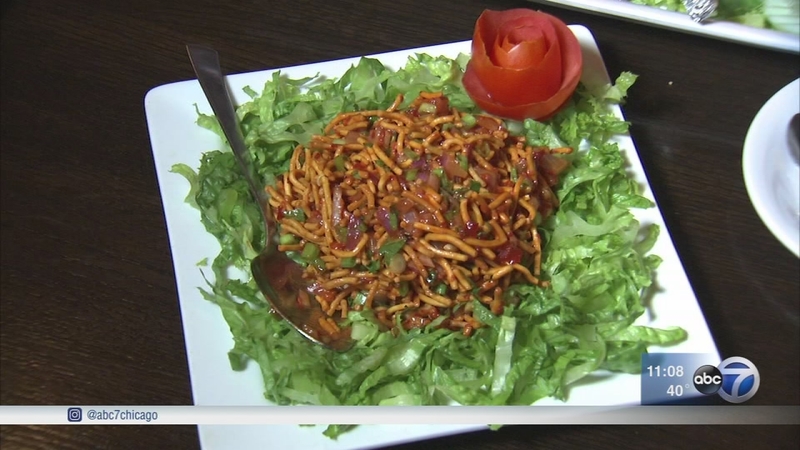 HOFFMAN ESTATES, Ill. (WLS) -- You might think all restaurants in India serve similar food - curries, chicken from the tandoor oven and fried samosas. But the Hungry Hound says there is also a tradition of Chinese food on the subcontinent, and for several years now, a local Indian restaurant has been cooking this Indian-Chinese hybrid in a Hoffman Estates strip mall.

Seeing the blazing woks and the Kung Pao chicken is a dead giveaway. This is a Chinese kitchen, right? But look closer: that's a spicy green chili sauce going into those noodles, and you don't usually see that much chili sauce getting added to sweet and sour anything. This is Indian Chinese food, in a six year-old concept called Bombay Chopsticks in Hoffman Estates, which comes from the same team behind India House.

All the cooks are Indian and the food is all halal certified. Bhel puri is a typical Indian snack, and here it's served over shredded lettuce as a fiery starter. That Kung Pao packs a real punch, as does the dipping sauce for the chicken lollipops. Whole fish is always available, and steamed dumplings usually contain ground chicken. In fact, there is no beef or pork on the menu, a nod to the mostly Indian crowd who usually avoids one or both.

"That was another reason behind this concept, give them something that they can all come here and enjoy Chinese food," said Jayara.

In this week's Extra Course, Steve talks about some of the restaurant's unique non-alcoholic drinks.