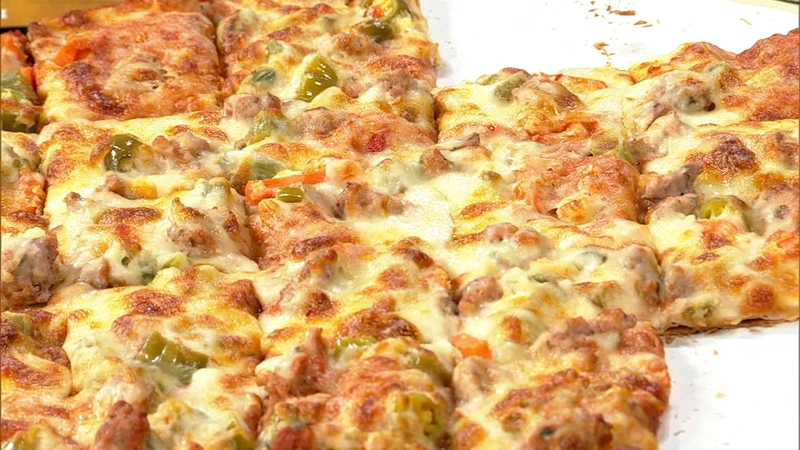 CHICAGO (WLS) -- Chicago is definitely a pizza town, but as we all know, there's more than just deep dish here.

It could be argued that the true "Chicago style" pizza is actually a thin, square-cut, "tavern style" pie.

In researching my new book on Chicago pizza, I tried 185 pies in the region, discovering the majority of them came from places where tavern style is the specialty of the house.

My number three pick in the city comes from the tiny, unassuming Side Street Saloon in Lakeview, where the bar is a lot bigger than the kitchen. A generous helping of cornmeal serves as a base for the dough, which is rolled out thin, spread with tomato sauce and shredded mozzarella, then topped.

Baked in a tiny electric oven, the pizza manages to punch above its weight, especially considering the limitations of the space.

My number two spot, also in Lakeview, is the legendary Pat's Pizza. Opened initially across the street from the Vic Theater, it moved to Lincoln Avenue 14 years ago. Gina Pianetto's grandfather, Nick (who went by Pat) started the business.

"He opened it in 1950, he was a truck driver. He opened it for my grandma so she would have something to do when he was on the road," she said. "His son was Nick, my cousin was Nick, my brother was Nick. My nephew is Nick, my other cousin is Nick. They named the dog Nico."

The key is that ancient mixer, which sometimes needs to be kick-started with a hammer, and a dough recipe that rests for up to six days, resulting in uber-thin pies.

"Thin and crispy. The way the dough is made, the amount of time that we let it sit before we roll it and use it even after rolling it we still let it sit for a couple of days," Pianetto said.

Bulk sausage is pinched-and-pressed into the dough, and the pies bake on a rotating metal deck oven.

That homemade sausage is one of the reasons this pie stands out.

"We mix all of our own sausage in-house. We don't send it out and have anyone season it or mix it for us," she said.

My number one choice won't come as a surprise to anyone on the South or Southwest Sides. Vito & Nick's has been making Chicago style pizza since 1945, but moved to their current location in the Ashburn neighborhood on the Southwest Side in 1965.

"Everything is done so old-school. The secret itself is how it's being made," said one of the cooks.

"My father, during the War, he came home and said to his mother, about the pizza, and she always made the Sicilian in a rectangular pan, and he said 'no mom, you gotta make it smaller, thinner, thinner, thinner," said owner Rosemary Barraco.

Tradition drips heavy here. From the fennel and oregano-laced bulk sausage to the way they pinch-and-press, even the ritual of having the oven guy toss the wooden pizza peel back to the pizza guy after each pie is placed in the oven.

Barraco says you have to have great sausage for a Chicago tavern-style pie.

"It is bulk sausage, not in a link. That's for a sandwich," she said.

In Steve's Extra Course Video, he switches gears a bit to tell us about a new program called Doors Open Dishes, which donates funds from a particular dish being served this month at Cindy's Rooftop at the Chicago Athletic Association Hotel to organizations that have been hit hard by state budget cuts.

In Steve's Extra Course Video, he switches gears a bit to tell us about a new program called Doors Open Dishes, which donates funds from a particular dish being served this month a