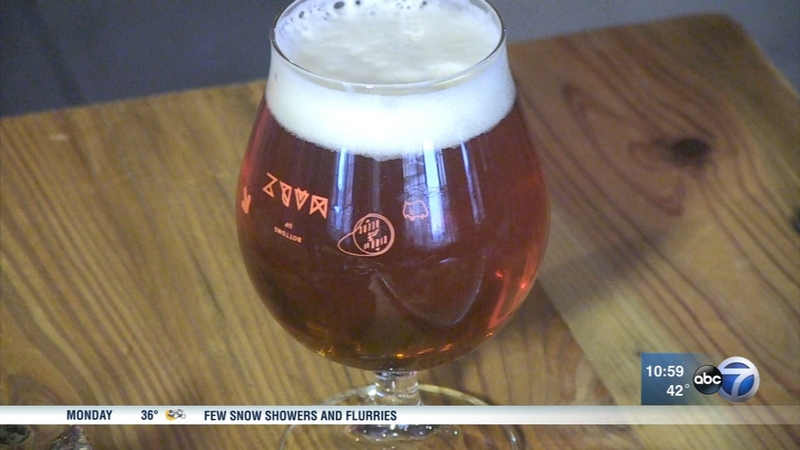 CHICAGO (WLS) -- A lot of new breweries have opened in Chicago recently. There are so many in Ravenswood, local brewers and distillers have dubbed the area "Malt Row."

However, a new brewery in the McKinley Park neighborhood is worth checking out.

It's from the same family behind Maria's and Kimski nearby. But now, he says, you need to take a trip to Marz.

It began small, but Ed Marszewski has been slowly building his company over the last few years. He's got a magazine, a bar and a restaurant. The addition earlier this year of Marz Community Brewing brought renewed interest to Bridgeport's beer scene.

"This particular facility was really born out of our experiences at Maria's and Kimski. We started making beer about four years ago, and it's specifically about producing the best craft beer we could possibly make," Marszewski said.

"We do make a lot of hazy IPAs. We do have a blending and barrel-aging program here to make sours and wild sours and hopped-up beers, that have been fodor aged or oak aged or barrel aged," he said.

Pretty much all of the beers are for sale, most in custom-designed bottles or cans designed by local artists. There's coffee, shrub soda and other drinks, but mainly a rotating list of funky beers you can conveniently watch being made down below.

"We focus on sandwiches and snacks," Marszewski said.

Snacks might include beef jerky or deviled eggs, but these eggs were first soaked in tea (a byproduct from one of their beers) then filled and topped with a bit of Korean chile, black mustard and fresh herbs.

Sandwiches are hefty, like a Cuban that's griddled with Swiss cheese, then sandwiched between Turano loaves and pressed until crisp outside. Don't think sport peppers, pickles, tomatoes and celery salt are only for hot dogs.

"We have an amazing bologna sandwich that tastes like a Chicago-style hot dog. Then we always have specials. We have two-three specials each week," Marszewski said.

As ambitious as the beer program is - 18 on draught, another 13 in bottles - the kitchen also punches above its weight. A very small space, and yet, they're doing pretty much everything themselves in-house, including brining and smoking.

EXTRA COURSE: One of the sweet treats offered during weekend brunch at the brewery.
EMBED More News Videos

In Steve's Extra Course Video, he takes a look at one of the sweet treats they offer during weekend brunch at the brewery.