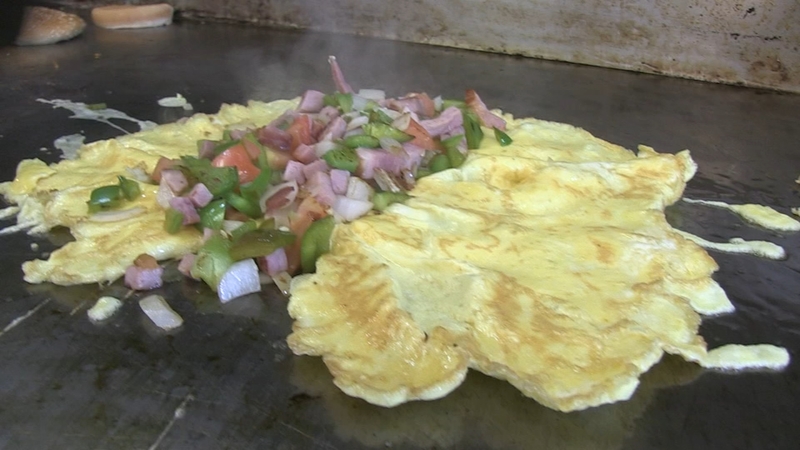 CHICAGO (WLS) -- Making it to ten or even 20 years in the restaurant business is considered a major, albeit rare, accomplishment. But the tiny Palace Grill on West Madison Street in Chicago is celebrating its 80th anniversary this year.

A favorite of Hawks and Bulls players on their way to and from the United Center, it seems poised to take on the next 80 years as well.

The Palace Grill has been a West Loop fixture since 1938. Part of its success is due to George Lemperis, who recently celebrated 40 years at the diner.

"It's been in in my family since 1955. My cousins were here, the Alpogianis family," Lemperis said. "They're wonderful people, and Uncle Gus and his brother, Uncle Mike, were here prior to me being here. There's not much Greek about this restaurant even though I'm proud Greek descent. We do have some Greek things - Greek chicken, gyros, we have Greek omelets - but we're pretty much an American diner."

For its first 60 years in business, it was just a diner counter where they served massive Denver omelets with their famous hash browns.

Not to mention the thick patty melts, which are stuffed with a pat of butter and served on rye, or the grilled skirt steaks, sandwiched between thick slabs of Greek sesame seed bread.

The diner expanded in 1997, adding a spacious dining room, where they proudly hang their Hawks memorabilia.

They also started making milkshakes, and thanks to daughter Christina, added a catering arm.

"We've developed quite a relationship with a lot of special people in the city. It's a tough business, it gets tougher by the year," said Lemperis.

"I'm probably the intangible that other restaurants don't have. We're a destination restaurant, I'm friends with a lot of people. People come here, I know people on a first-name basis. In the restaurant business you're only as good as your last meal. You've gotta be on top of your game every day," he said.

Since the Palace Grill is open from 6 a.m. to 3 p.m., most of the items on the menu are breakfast or lunch focused. However, as a concession to the Hawks, the Grill stays open until the puck drops for every home game.